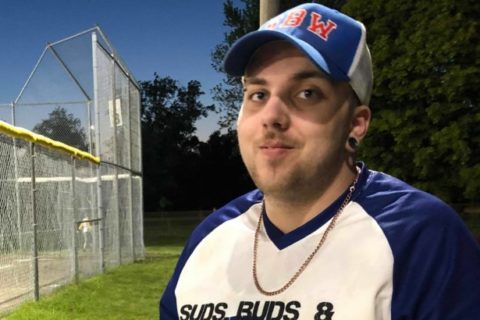 The clouds parted, the wind died down and the sun shined in Ottawa as Tuesday Suds Buds and Windmills recreational team gathered at the bleachers. Dupes, Dylan, Alex, Eric & Dallas from Tuesday Competitive would stick around to cheer on their Buds. Marcel would be assigned to officiate (can I say that instead of umpire?) the game. Krystle would replace Heather in the lineup but otherwise it was a fulltime roster.
Lyndsay, the stunning and captivating captain of our Friday Beer Babes would flirt w/ some Cupcakes and hound some of the S, B Dubs fresh meat as she looked to raise ticket sales. Have you gotten your raffle ticket? Here’s a list of ticket numbers taken and the prizes. We choose the winners at our third annual tournament. Besides buying your ticket you should probably sell a couple, not only would it impress your grumpy captains BUT it could win you a VIP ticket to the end of year Thank You event.

It was difficult for Lyndsay with a Y to even tell WHO was on our team since a lot of the fresh faces didn’t yet look their best, to ensure YOU’RE looking your best visit our online store!!

Post-game manager Dyllan with two L’s would start us out with a stand up double reminding us why he’s lead off. Does anyone know if he and Eric are single?
The opposing teams female batters would each, consistently, hit dribblers that in some leagues would be considered foul (cough RA *cough make a foul line rule) after the first inning infield would adjust and Kimberly would pull her D together and deliver consistent outs on the gimmies. Kim however did break up the double in the 4th however it was refreshing to see Krystle bail Kim out for once as it’s quite honestly consistently the opposite. Matty was brilliant as always with running backwards catches. Alexandra had a least one big throw back in to hold the runner at 2B. Dyllan with two L’s would call a ball a tad late, making us hold our breath but make the out despite lack of hair flip.

Matt(2), Biju(HR), Alexandra and Krystle would be the only ones to come in this game leaving the score to be 6-5 and Tuesday Rec just barely missing the mark. Although there was a mysterious run in the 3rd that appeared but it’s of no fault but our own, specifically Alex who was not keeping track and checking each inning. Shout out to Krystle, Matt & Biju who also got base hits each at bat.

Is it not pretty blue, linked up? That’s because you suck and didn’t complete your website profile! Go do that now! Simple click edit profile in the upper right hand corner of your screen, answer the questions and upload a photo! Do you use email, Google, Facebook or a computer? Do you use a smart phone? Then I am certain you can do this. Message a captain when you’re done.