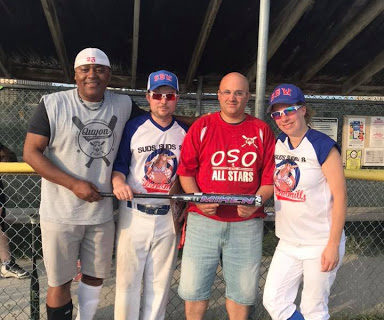 It gives us great pleasure to donate a bat to the the Quyon Camp of Champions. This softball Tournament holds a special place in the hearts of Suds, Buds & Windmills. This slo pitch softball tournament will take place outside the Ottawa region.

Krystle, Sarah Z and Captain Eric first supported the Special Olympics All-Stars back in the Third annual Quyon Tournament back in 2013 playing with the All Star team along side Carm & Johnny.  Suds, Buds & Windmills softball Ottawa based softball team would then participate in the tournament for the next four years. Rain, Shine, Heat Stroke and beers, they did it all.

Paul Blackmore and the All-stars do a great job running this slo pitch softball tournament that as a result raises money for a great cause.

Suds Buds & Windmills enjoys playing and volunteering at other tournaments but we also have our own! Interested? Here’s the deets!

Ottawa softball tournaments are just one of the many things we do. Our plan is to host a tournament every year & until 2039. Suds, Buds & Windmills does more than just play sports.
We popped our cherry in 2017 when we hosted our first, an incredibly successful Virgin tournament. Wanting more we returned in 2018 to get Sloppy. Sloppy Seconds & SloppIER Seconds brought more success.
We (okay Krystle ..) wanted to host men’s but decided co’ed’s our path for now and offered the 2019 Three Way tournament.
Small recaps of the games played are just one of the little details that separate our SBW tournaments from other softball tournaments in the Ottawa and surrounding area. If you’re interested in entering a team contact us , we would love to tell you more about how we stand out.
We recognize, remember and value those who have been with us from the start. A special discounted rate will be offered to the teams that supported us as well as spots held for returning teams.
Please link until2039 to the FAQ page.
Suds, Buds and Windmills is really more than a team. We pride ourselves in the work we do within and for our community. If you’d like to get involved, reach out to a captain.
Updated June 19, 2020 by JulieA
0 July 10, 2019 Eric Delisle 2019, Softball