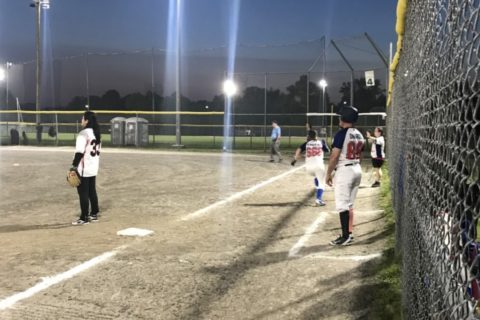 After an impressive win in game number one where the buds scored 14 runs, the time had arrived for game number two. The beer babes team captain gathered everyone around to give the team pep talk. After saying sometimes she goes and sometimes she doesn’t, Lyndsay realized that she didn’t know what else to say, she sprinted away (keep this in mind for later). Needless to say, this didn’t really help the team get pumped up for the game haha.

Anyway, being the home team, the buds started the game in the field. The Grim Reapers scored 6 runs in the top half and the buds only sent 4 batters to the plate in the bottom half to start the game down 6-0. Not a great start but things improved. In the second inning, Cameron hit a ball out of the park but it was foul so it didn’t count for anything. He then grounded out but Dan picked him up by hitting a home run himself. In the third inning, Alex started the buds off with a nice opposite field single. Lyndsay got on base and then FTG hit a double. Upon rounding second ahead FTG, everyone was yelling at Lyndsay to run faster. Continuing at the same speed, she rounded third and was thrown out at home shortly after. (If she had used the same speed she used to run away from her pre-game pep talk, she would have scored no problem haha). Oh well!
In the fourth inning, it was all about the outfielders. Dallas had a great catch in left. Lyndsay playing center field, had a high fly ball hit to her. Dan playing rover ran back to get it but decided to let Lyndsay go for it. In doing so, Dan still went behind Lynsday and got down low to back her up. Turns out Lyndsay was nowhere close to the ball and it went right into Dan’s glove for the out. It was a hilarious play that many will remember for years to come. The defense was strong from there keeping the buds in the game. Cameron’s next at bat, the pitcher threw him three straight balls but then was able to get a strike on the fourth pitch. Knowing he had the power to hit it out, the pitcher gave Cameron nothing to swing at for the walk. The next inning, Cameron got his revenge when the pitcher came up to hit. He hit an opposite field liner than Cameron jumped up and snagged at second base to make things even again.

Heading into the bottom half of the 7th, the buds were down 8-6. With Jared and Kim reaching, Cameron was up. Having not received anything good hit to hit in his last at bat, he went for the first pitch and just missed it leading to an easy fly out. Perhaps he’ll learn to take the first pitch next time haha. Lyndsay avoided ending the inning by beating out the throw at first thanks to a double pump throw (or maybe another gear after being too slow earlier lol). It was then Dan’s turn to be the hero. He unfortunately hit a high fly ball but with everyone playing deep, no one was able to get it and Jared scored to make it 8-7.Claudia was up next and was down to her last swing. She hit it in the air but it was caught and the game was over.

The final highlight was the double play turned where FTG fielded a ground ball and threw to Cameron at second to get the force out from the runner at first. The runner on second took a few steps toward third and was a little caught with Cameron now standing on second with the ball. Cameron ran after the runner to start the pickle and then threw to Frank at third, at which point the runner turned back for second. Frank then threw to Dan, who ran in from rover to back up the play, and Dan tagged the runner out to complete the double play and the inning.

All in all, despite the loss, it was a fun game because it was close. Hopefully it provides inspiration for future games since the game started 6-0 and ended 8-7 showing that comebacks are possible.