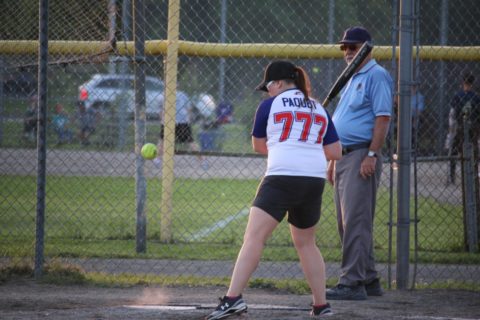 For the first inning the buds took the field to shut down the other team with three straight outs. We had Jared get a player out on first, Michelle with a catch at rover and finally Guillaume took the out to end the inning. With a high team spirit the buds went up to bat. There was no disappointment when our first out was after getting 4 players in to score. Most of the line-up got to bat before getting shut down by the Bag Stompers.

The second inning was a quiet one. Our pitcher was able to get a strike out and the other team weren’t able to score any points. Not much happened for us either up at bat and no points were scored. With the Bag Stompers up at bat once more the buds were ready. We had Frank run and do a crazy slide not to miss the ball to get the second out of the inning. Next up Sara-Rose caught a pop up at home plate for an easy out.

The buds went up to bat and got another 3 runs. Just passing the half way mark for the game; the buds are in the fourth inning and leading 7-3. With a bit of difficulty the buds let in two runs but then shut down the other team. Once again at bat the buds showed what they’re made of but mostly Krystle for sliding into 3rd base for an extremely close call and Eric for hitting a grand slam.

The buds got the lead by an extra 5 runs and it showed all the way into the 5th inning. Only letting the Bag Stompers score twice but in return the buds all got to bat and went on to score 7 more runs therefore ending the game with a win.

One extract that has to get mentioned would be Captain Lyndsay’s speech at the end of our game. She started off by saying “sometimes she goes and sometimes she don’t! Tonight it could have not went…..” At which point she froze, didn’t know what to say and started running towards the street. She took a few seconds to herself then came back and asked that we all forget about her speech. Which I clearly did right?