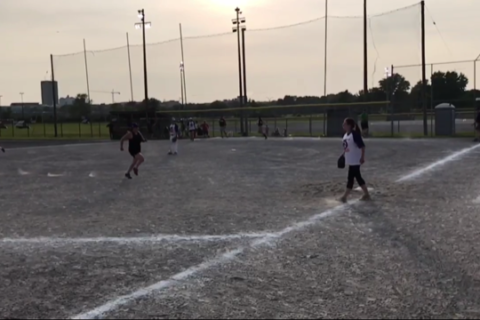 The Buds coming off a forgettable game against the Evil Empire. Suds, Buds & windmills have another tough game in the RA A division softball league with the Deloitte Dynamo. Buds already hurting with Shortstop Justyn with a Y still out nursing a hammy injury. Also hurting that Seb is off doing Seb things. New recruit Biju Mathai gets the call up to help fill in the depleted Bud line-up. A big welcome back to Anne who is coming back after being away with injury.

The Buds start off a bit slow out of the gate. Those 6 pm games are hard to get fired up for. The Buds only managing to cash in a lone run to start the game.  Michelle O starting off strong for the Buds D with two outs at 3B. The Dynamo were already fired up and come out to play putting in 4 runs.

keeps stuttering posting up a goose egg.  Fortunately the Buds D comes up strong to keep the game close with a big out in center field from Biju and even bigger double play from Michelle O at 3B.  Latter in the game, Dynamo players were herd talking about Michelle’s gun of a throw and not pushing bases on her.

The Buds building of that good inning come out firing. Starting with Captain Eric Delisle at leadoff single (doing his one job to get on base) and with some small ball and handing the bat over building up to a 3 run jack from Dylan.  Not stopping there the buds kept the small ball going finally being capped off by Anne putting up a 2 RBI single to end the inning with a big 7.

The Dynamo after stalling the last inning came alive at bat. With a steady parade of gap shots, the Dynamo managed to answer back with 7 of their own and re-established their 3 run lead.

Biju does his job to get on base as the leadoff hit. but the Buds offence as the bottom of the order couldn’t flip it over and only manage to come up with one run. The Dynamo offence kept humming along putting up 4 more runs. Pete Giles Came up big in left field grabbing 2 fly balls. Backup Shortstop Alex Thomson with a gold-star throw to 1B to put out Dynamo’s play Kevin 2.0.

Buds get back at the sticks With Sarah Z doing her job as lead off taking a walk to start thing off only to come into a stale as the Buds bats go cold. The Buds defense does manage to rally and come up big with a great effort to hold the Dynamo to a run. Middle infield Alex and Dylan getting a lot of work . The inning was capped off with an absolutely incredible run by Pete in left field to catch a short pop fly. He almost need to run twice the distance to slow himself down from that sprint!

With time running out, down 7 runs going into the top of the 6th, the Buds really need a rally at the bats but the there was no power left. A quick 3 up 3 down by the Dynamo sealed off the game.

Definitely a better effort than the previous week.

They were definitely a machine for using bats to converting balls into runs….