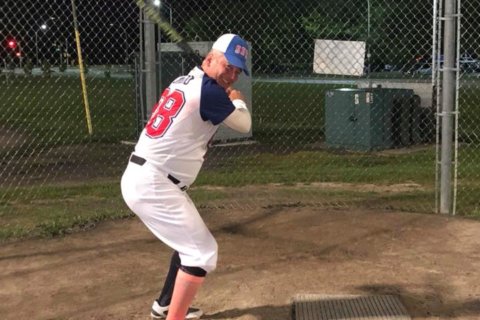 Friday night was a beautiful one to play softball against the Roger Dorns here in the city of Ottawa. We had a late start due to the game before ours being delayed waiting on an umpire to show (even though we played an entire game waiting for a real ump to show last week…burn!). The postponement didn’t faze the Suds, Buds & Windmills however, driving on to win 12-7; most likely owing to all the team bonding we did at the First Annual Kickoff BBQ last Friday night! It also helped to have an AMAZING volunteer umpire; she should be hired by the RA Centre! Every Bud on the team played really well and their determination to have fun and win paid off. We’re 1 for 1 team, let’s keep the momentum going!

Player of the Game: Eric

Much to Krystle’s dismay (and secretly, joy) Eric played a fabulous softball game, making every out he snagged look effortless. He even managed to throw in a fancy 360° spin, “Jith-style” making it the end of an inning and allowing us to get those bats going yet again. Even Krystle yelling “you’re not getting player of the game, you’re the captain!” didn’t deter Eric. Captain or no captain, by the top of the 6th, it was clear that he was striving hard for the chance to be “Player of the Game” and he definitely earned it.

Play of the game:

We have two softball plays that stood out this game: Eric’s leaping catch that lead to a double play was really impressive and helped us end an inning, and TBIL’s dirrrrty home run accomplished by keeping his head up and continuing to run the bases while the other team made errors and overthrows.  Real heads up baserunning for Ottawa Softball.

Just because someone is dressed like an Ottawa softball umpire, it doesn’t make them an umpire.