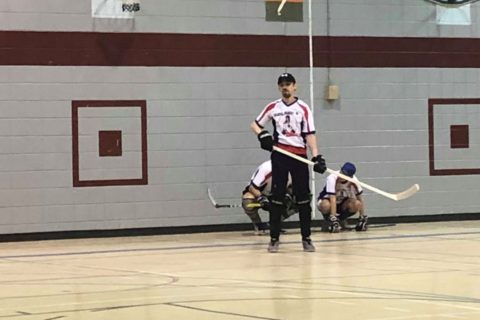 Our final game of the night saw SB&W’s taking on EM in a game that was closer than expected. Dylan would decide that his heart wouldn’t be in the game unless he heard some solid tunes, specifically Sober by Tool. Having no cash to bribe the DJ , Dylan would instead use what he had & promise to not score any goals. A promise he would deliver on despite the song blaring over the speakers being Schism not Sober. Still distracted by the previous music, Dylan was a little late to warn us that Blue just happen to have on a A division men’s jersey and he should be man to mark. The first goal came from spare, Matt Denis whom we dubbed “Blue”, as he rifled one home from the point giving EM the 1-0 lead.

The next goal came fifteen minutes later & was started by a goaltender play as he swatted the ball away from the scoring threat & it happened to make its way down the floor & Chelsea Harbert swatted at the loose ball, made contact & deposited it into the net, 2-0.

With a little over a minute left, Jake Miron would control the middle, wristing one home from the slot & make it 2-1 as we were headed into recess.

SB&W held the large edge in shots, 16-7 but weren’t ahead on the score sheet. Sex would pass on a line change twice, on two quick whistles only to have no real opportunity pop up in the next three minutes. Heather would dance her butt off with the goalie forcing the much needed whistle and making her an Instagram sensation. Seven minutes into the half, Captain Eric would remind us why he wears the “C” and get a shot off that was a seeing eye wrister evening this one up at 2-2. With just over three minutes remaining, Captain would get a point shot off that beat the tender giving SB&W their first lead of the game, 3-2.

Well EM tried, they pulled the goalie but couldn’t tie it up as SB&W’s take this one 3-2. Shout out goes to spare goaltender Carlo De Marinis as he was getting ready to leave & stepped in to fill the spot of a last-minute cancellation, we are told it was his 6th game of the day but he didn’t show it.