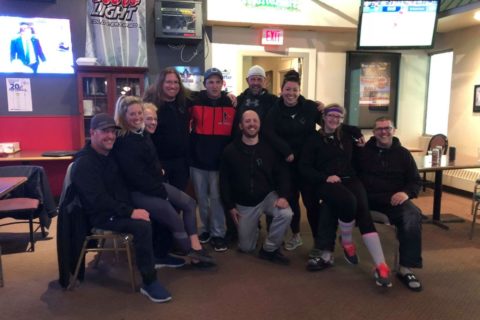 First inning: Mills’ team gets three up, and three the fuck out! No runs in.
Connor hits a solo out of the field! Some girl gets out next. Jay Paul hits oppo and guns it to third base. Marty hits it oppo too and gets a runner in.
Second inning: Gord on French team cracks it into the outfield and makes it onto third base. JF of the french team cracks it middle and makes it to second base. Phil hits an in field home run and gets the maximum five runs in for the inning!
Marty makes a joke about a ball being fair (it wasn’t) and the ump freaks out at Marty and says he’s sick of this shit. Marty later apologized to the ump. The french team don’t let any runs in.
Third inning: Mills’ team doesn’t let any runs in!
The french team matches Mills’ team and stops any runners from getting in.
Fourth inning: the French team unfortunately doesn’t get any in! Again!
White hat dude hits it right on the right line and bolts it to second. Girl dressed all in black hits it far into the outfield and gets two runs in, while making it to second.
Fifth inning: JF from french team gets all the way to third base. Gab almost makes it to first as Marty had to jump in the air to catch the ball, but he makes the out. Anne-Ma or Isa (not sure!) cracks it outfield and makes to it first base.
Mills’ team doesn’t get any runs in!
Sixth inning: Nic from French team hits it out of the field first up. Gab hits oppo and gets a run in. JF gets Gord home!
French team gets two of Mills’ team up and two down. Connor gets home! Fetch hits an out of field home run and gets four runs in!
Seventh inning: Mills’ team gets three up and three down and wins the game!