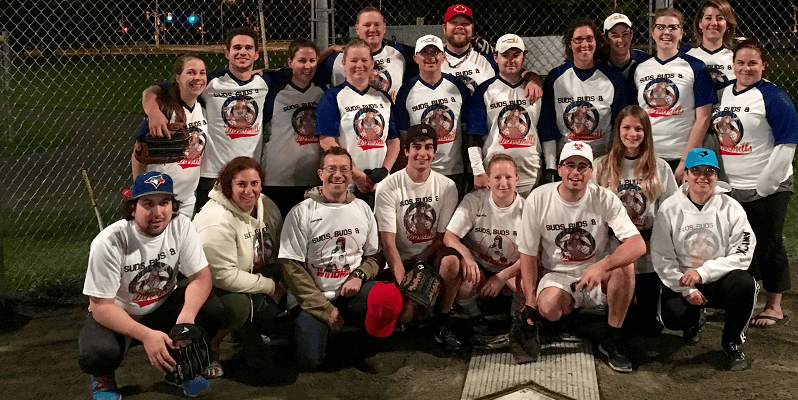 It was a rocky start to Ottawa softball A Div. The afternoon had a work emergency for Greek Seb, he contacted Krystle to inform her and Captain Krystle asked long time Bud Pete Giles to spare. Just before dinner Seb wrote Krystle saying things had changed and he could in-fact be at the game. Eric made the decision not to cancel with Pete and thus both boys would join the line up. The decision proved to be intrimantal in Suds, Buds & Windmills adding another W to their tally. Sebastien geared up and excited that he could still play in the game biked to the RA as fast as he could after work, ensuring to arrive a full 3 hours early for the game. The same level of excitement would lead to throwing a grounder so hard during practice that Captain Eric would be unable to handle the bounce and end up with a small black eye and bloody nose.Melanie, Katia & Heather would run late to the game leading Lawrie to eagerly volunteer to go as back catch and SBW would take the field. The lack of rover would prove troublesome as the first inning saw 2 runs come in against them.  Like I said SBW’s debut in A div would be a rocky start haha. Team water bottles covered the dug out and spirits were still high as captains quickly re arranged their line up as needed.

In the second inning Heather would arrive and SBW would be able to impliment the planned line up. With everyone in their planned positions defense would LOCK IT DOWN allowing only 1 run (Krystle’s fault! ) in during the next three innings. Outfielders Bryce,  Seb, Justyn with a Y and long time LF pete would have some absolute BULLETS coming in to hold runners and some impressive catches to eliminate them. Pete Giles attemped to keep a ball in the park with a huge jump at one point! Ashley would have a running basket catch and Eric would cover P and 3rd when needed (all the time).

The game would continue at a steady pace with SBW trailing behind. Ashley and Krystle started some mandatory – Back of the line – pump up the team hi-5s to get everyones spirits up. Players hustled on and off the field with a new found energy, all looking stunning in their SBW jerseys, hats, & sweaters. Bruce munching on popcorn could be heard cheering from the dugout.

Pete, Lawrie, and Justyn with a Y would all bat beautiful 3 for 3s. Blake would jack one over the fence while Trevor, Lawrie, Bryce, & Pete would come in on 2/3 of their AB’s! Ashley would lead the ladies in batting with an impressive 3/4 AB.

In the 7th, down but not out Captain Krystle not running it out and not listing to her glorious base coaches would get lucky and still manage to score an inpark home run tieing the game. Bryce and Ashley would do what was needed and get on base leading Pete Giles to  step up to bat and do what Pete does, SBW would continue their winning streak with a 14-12 win. What a night it was for Ottawa Softball at the RA Centre!

Check back next week for another Ottawa Softball SBW post game!