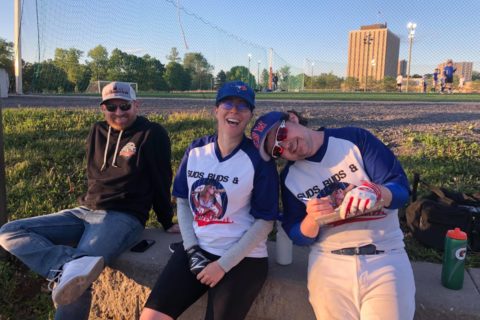 T’was the game before the kick off Bar-Be-Q, when all through the stands,

Not a fan was silent, as everyone clapped their hands.

The bats were all hung in the dugout with care,

In hopes that each ball would land fair.

In the first inning many singles were hit,

The other team had trouble keeping the ball in their mitt.

As Eric S. stepped up to the plate,

It was clear that a homerun was his fate.

As we stepped out to play some defense,

We kept the crowd in suspense.

As each play was made, the truth became clear,

Three outs would be easy, and cause all to cheer.

The third and fourth innings did not differ,

The competition did not get much stiffer.

Seven runs declares a mercy, as each ball lands fair,

We won the game I do declare.

As we move off the bench and pack up our gear,

It’s time to head to our Bar-Be-Q and indulge in some beer.

As the night goes on our cheer lingers,

And Seb’s shirt is torn by Krystle and Ashley’s fingers.

One by one people head home,

Leaving the party and ending my poem.

Come back next week for more Ottawa softball post-games!