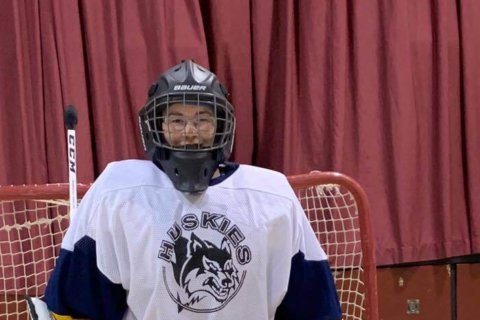 Our next game saw SBW taking on HSK in this always intense match-up between these two rivals. It would take nearly seven minutes for our first marker, and it came from Alastair Webb as he beat the tender with a wrister from the point. Kelly, from SBW, would even things up as she buried a rebound in front, 1-1. Andrew Anderson would give HSK back the lead as he squeaked one in, on a shot from the point, 2-1. Ryan Daigle would extend the lead as he wristed one home from the slot, 3-1. Anderson was at it again as he intercepted a pass, and wired it top cheese, 4-1.

Krystle, from SBW, would score with a floater, just fifteen seconds into the half, 4-2. Anderson would get that one back as he grabbed the loose ball and went in all alone and wristed it home (5-2). Bells would get his team to within 2, as he cut to the middle and wristed it short side, 5-3. With time winding down, and the goalie pulled, Anderson would end all hope of a comeback as he buried his fourth goal of the game giving HSK the 6-3 victory. Although HSK were dethroned as top spot in the C by the double win week from Electric Mayhem, making next weeks match-up for first place.