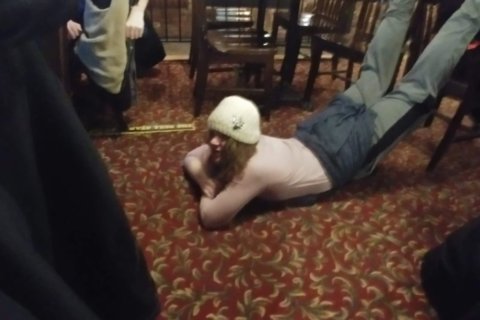 Ottawa Ball Hockey team SBW’s and one day league, was looking a little different this week.  Team Dylan was formed while Team Cuba was on vacation. No one enjoyed that a double header was booked but it was and here we are. Playing in game 1 of 2, taking on FO, who have been on a “hot streak lately”. This wouldn’t be a HTBHL write up without talking non stop about Dylan, now would it? This game was really one player made the difference. Dylan Cundell would open the scoring as he one-timed home a giveaway, by the goalie. Cundell would get the second one as he slipped it under the goalie while streaking in, 2-0. Cundell would complete the natural Hat Trick as he ripped it top corner, from his own end, 3-0. I liked it better when we came up with different nick names for Dylan but I guess writing Cundell on repeat works too. OG  Kelly Hall would extend the lead further as she buried a wrister on the far side, 4-0.

Second Half Riel or Dylan?

As time was winding down in the half, Eric Marleau would bury a wrister, far side making it 4-1 as we were headed into the break. FO were trailing in the score, but dominating in shots, 22-10. Meh, everyone knows Suds, Buds & Windmills has Riel, hands down the best goalie in the league. Why aren’t more post games just written about Riel? Good ol Cundell would open the scoring in the second as he buried a short side wrister, 5-1. SBW would get into penalty trouble, wasn’t Krystle cause she’s in Cuba. FO would capitalize on Claudia being short, I think that’s what happen n. e ways. Marleau would bury a rebound off the wall through the five-hole, 5-2. Marleau would complete his Hat Trick as he buried a wrister in close, 5-3. With time winding down, Cundell would get a breakaway and bury it making the final in this one 6-3 for SBW. You would think that’s a decent score but let’s just wait and see how it turns out.

Team Cuba spent the day on the ocean, Captain Eric hung out with the latest Baby Bud Emersyn, Back in Ottawa soon to play some Ball Hockey.