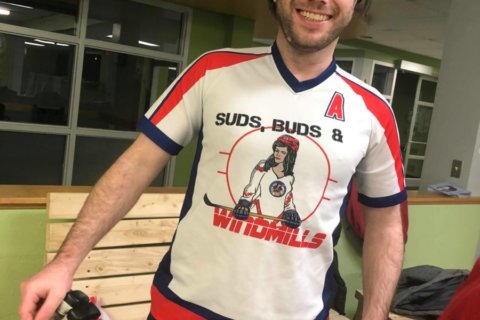 Our next game saw SBW taking on the new comers MNY. MNY would open the scoring as Dylan Cundell would get the first goal in Franchise history by beating the keeper with a wrister in the slot. SBW would get that one back as Jake Miron put the ball between the D’s legs and wristed it, up top, 1-1. Alex Thomson would wrist one five-hole to put SBW up 2-1. “You got a point!” Exclaimed Krystle in possible disbelief. Cundell would even it up as his wrister beat the keeper top corner, 2-2. Jeremy Nichols would get that back as he beat the keeper with a wrister. Miron would follow it up burying the loose ball on a scramble in front. That’s how it looked at break as MNY led in the shot department, 11-10 (Riel was standing his ground with some wicked glove saves); but SBW lead in the score, 4-2. Nichols would get his second of the game by having his shot go off the back wall, off the goalies foot and in, 5-2 on a lucky bounce. Justin Stevens would get the next one as he use the old fashioned wraparound, 5-3. SBW would get the next three, dashing the hopes of MNY, as Miron would bury a pass out front to complete the hat trick. Marc Belisle would blast one home after Krystle made a terrible pass attempt but turned out to be a perfect pass to Bells. Finally Thomson would just throw it on net and Kelly would bat it in as SBW take this one 6-3.