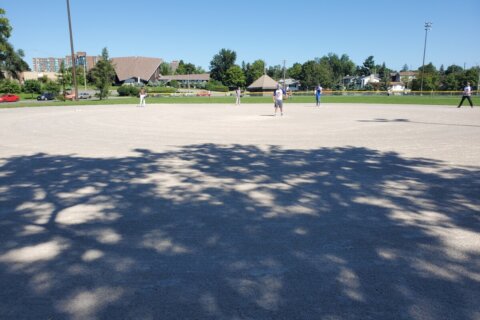 Team 1 was rolling early with the Offence. Started with the first batter of the game when Marty led off with a hit to get on base, that was followed up by a Marc A hit and the offence was moving. The early offence was all for not as we only got 1 run that inning. Team 2 had a difficult time getting offence early and often as team 1 was getting good pitching and defense to help them keep it a close game.

Top 3 Jacob got on with a leadoff double. Next at bat things didn’t look too good for Jacob as took off to soon and got caught in a run down between second and third, but managed to make it back to second base safely.

By the end of inning 3, team 1 was up 6-0 and things looked good for them. Top 4 and that is when the Homeruns started to happen. Marty led it off with a base hit and then Marc A drove him in, up next was Dylan and he hit the first of 2 2 run home runs for the team on the day.

Bottom 4 that is where team 2 got going offensively, with 2 on and 2 out, a walk loaded the bases and their offense took off. They capitalized on the bases loaded walk and made it a close game.

Then the rest of the game was back and forth after Krystle made a couple of trades to try and make the teams a little more even.

Great offense and defense all game and we followed all COVID rules on the website.

Claudia, usually a player on Ball Hockey came out and had a couple of hits.

Fun day had by all involved. See everyone next week at Krystle versus Dylan.