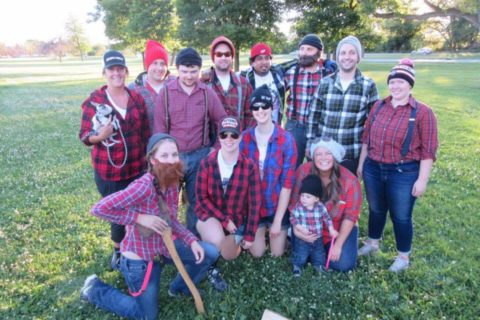 The 2019 season opens up on game 3 with the Lumberjacks. No chance to easy into the season this game jumps right into the thick of the 2019 A+B Division with a historical hard match-up for the Buds. If last season was any indication, the 6 pm games prove to be most difficult to generate offense and the Defence reigns supreme. And as we see in this season opener this trend is continuing. First innings comes up with the Lumberjacks scoring a running with the first batter of the season taking a solo home run.  The SBW defence start to slow things down and get out of that with only the 1 run as damage. After much complaining from the leadoffs and flying out, SBW gets the train rolling with a big liner from Dylan to get aboard and Pete taking a 3 run Jack to open the game up for the Buds- very good rally with two runs out.

The next two innings were in full defensive lock down by both sides keeping the game at  3-1 Buds lead going into the 4th. The lumberjacks start to press in the fourth with their Pitcher placing a 2 run shot. Captain Eric said he could place the ball anywhere and he chose to place it over the fence!Captain Eric also chose to throw the ball away instead of to Sarah letting them take on another run. Bottom of the fourth the Buds fire back with a two run Shot courtesy of Dylan Cundell. In the 5th the Jacks were able to tie the game up with a solo shot and back to tight defense we move quickly into the 7th tied 5-5. After a good start the Buds broke down with a few errors letting the bases be load to have out old nemesis the Lumberjack’s Pitcher at bat.  Instead of a home run, this time he placed a perfect shot deep down the first base line scoring all the running aboard putting them up 8 to 5. Trying to rally back the Buds get started with an Awesome shot by Tex over Lumberjack’s captain Dyllan’s head in center field and followed by a double as Captain Krystle did the same thing! Dylan managed a sac fly that scored the lead run, but the Buds were unable to cash in the winning runs that were left on 2nd and 3rd.

It was a very close game and a very good start for the season!

A wonderful softball game that took place in the heart of Ottawa, the Buds , the suds, the windmills playing softball and all sports in the Ottawa region. SBandW carrying on doing what they do until 2039, because Until2039. The Ottawa community always invited to take part in softball or Buds Give Back aka BudsGiveBack.