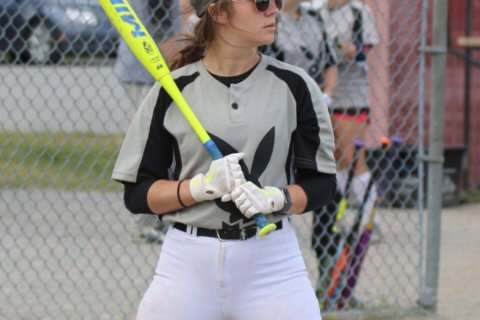 Lead-off double for the Playball Girls and singing? Who let the Eugene Out?, is apparently the hit of 2019. More doubles from Vicky returning in a Bunnies jersey. Captain Daniel  at the plate and showing restraint and taking a walk.  The Bunnies after the hit/walk parade manage to take the inning with 5. On the flip side with some more signing praise for the Pitcher Eugene with some dirty board front to back left corner pitching shut the door hard making 3 up, 3 down .

Top of two Eugene back at it takes a deep shot in the park to center and legs out a triple, who knew he could run that fast? Bottoms Up gets a good Defensive play as their short stop manages to pick off Dan running home.  But the Bunnies’ hitting still too much and put up another 5. In the bottom we have strange play where the umpire asked if the players needed time to hug and then we say second base Sean R. hugging the pitcher from bottoms up after an attempted tag play at 2. Sean saying he could get a fellow Habs fan out.

In the third Bottoms up being patient getting some walks but, Eugene’s pitching still strong and getting some K’s.  Captain Daniel tries to turn two with a catch at rover and a rocket to home to try and catch the runner pushing home but the balls pops out of the glove, Bottoms up on the board.

Bottoms up see a change in pitching, but more hits from the girls and they are running wild.  Bottoms up does manage the double with a 6-4-3 to end the inning stopping some damage.

In the late part of the game we see some big catches in left field from Keanu and a laser from 3b Vicky laser to 1.  Eugene continues with the strong pitching also getting a K proving to be too much for bottoms up.