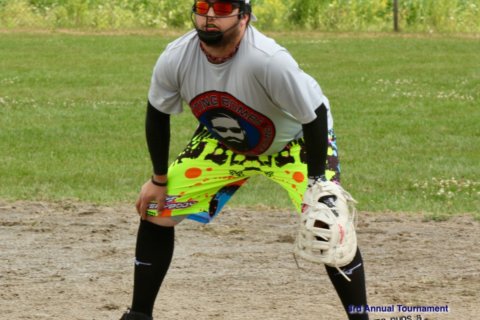 1st inning: grey team gets a few runs in, with a dude on the team cranking a nice hit to left field, burning Dallas. Dallas hits a crazy ass hit to centerfield and makes it all the way to third. Alex cranks it to left field and makes it home. Buddy Blue Shirt ends the inning with a nice hit and gets 5 runs in.
2nd inning: Light Blue Shirt guy from Bottoms Up makes it to second base. The pitcher unfortunately lets a few people walk the bases and into home plate. Wade from Jack Astor’s burns centerfield and gets Adria home. Big Red Shirt Guy cranks it over centerfield too and sends Marie-Eve to third. Burgundy sweater girl cranks it good, and moves to second.
3rd inning: Giffer from Bottoms Up gets a decent hit but unfortunately third base snags it. #11 also gets a nice ass hit, and makes it to first. Thomas Rhett girl gets a nice it too, and makes it to first. Alex makes it to first, and Adria pushes him to second. Navy Blue Shirt Guy makes another nice hit this inning and moves two runners in. Dallas ends the inning with 5 runs in with her nice ass hit to outfield.
4th inning: the pitcher on the Jack Astor’s walks the first girl, but the second dude gets up to second base. Unfortunately the third base runner runs to home plate but the Jack Astor’s catcher catches him out. Wes finally gets a good hit for Jack Astor’s and runs to second. Biju also gets a nice hit and runs to second too.
5th inning: the big guy in white pants made it to first, but unfortunately couldn’t get anyone home. Alex gets a crappy hit, but the first base fumbles and he makes it to second. Dallas cranks it center and moves to second. Each hitter moves one person more and more into home to finish the game in a mercy!
Final score: 22-10.