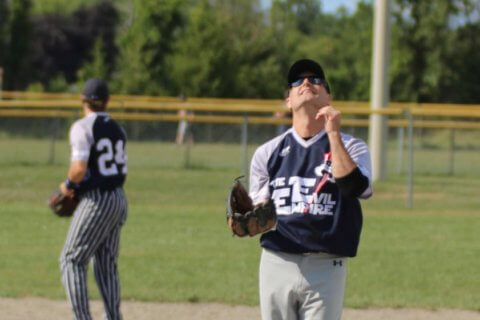 Les Mean Mines managed to get a runner on base, but Evil Empire’s defensive play managed to shut it down without a run. Evil Empire managed to find some gaps as the rain started to fall again, other than hits right to Shortstop and Left Field, but Les Mean Mines ended the inning with only 3 runs scored.

#20 on Les Mean Mines made up for a missed swing at bat with a hit to right field that ended up as a triple. Les Mean Mines took some tips from Evil Empire’s batting in the first inning and did a good job finding some gaps in their batting, but Evil Empire’s Rover made a diving catch and the Second Baseman made a bullet of a throw to rob Les Mean Mines of a second run in.

The rain stopped, but otherwise the game continued in the same pattern, with Evil Empire getting a few more runs than Les Mean Mines. #20 on Evil Empire had one particularly nice hit which curved nicely into right field. #11 on Les Mean Mines had some good patience, getting the walk but being forced into a fielder’s choice right after.

After enough homeruns were hit, a few of the Evil Empire team members were sent into the fields beyond to bring back some balls. They brought a few back, but the ump was trying to direct them to another one (which they managed to find when they went out again the next inning).

#27 from Les Mean Mines had a great hit, a single with the runner ahead advancing 2 bases, and some good base running to avoid running into the out at Second. In their next at bat, the girl in the orange shirt had a nice stop then a beautiful throw from her knees to get the force out at Second.

Congrats to Evil Empire for moving on in the playoffs, and a big thank you to Les Mean Mines for joining us again this year.