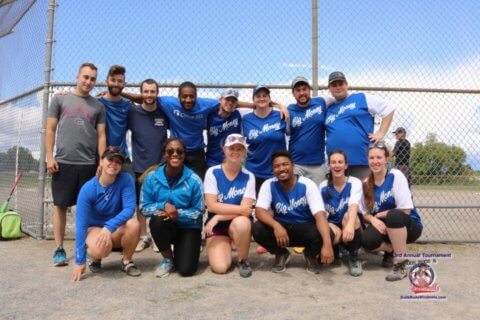 The game started off with Big Money in the field, with the pitcher walking three batters before a single by Blue Tank Top brought 2 runs in for Bottoms Up. Bottoms Up looked like continuing in the same vein, until a double play by the Third Baseman picked off the lead 2 runners. The top of the first inning ended with the fifth run walking in. Big Money picked up on the bats, with a nice hit up centre by 27. Then Shortstop on Bottoms Up showed good range for a fly ball at the edge of the infield. Pitcher from Big Money had a nice line drive to short outfield to show some good offensive play, but didn’t manage to score due to a line drive to 3B.

Big Money tried switching up their pitcher for the second inning, which sort of worked as Bottoms Up only scored 4 runs while alternating walking and hitting, including a line drive which was caught by the pitcher. The best play of the inning was by a spectator at the top of the stands, catching a foul ball a row in front of him without falling down the bleachers. The first batter up for Big Money was really eager to hit and then to run the bases, but unfortunately didn’t score a run.

In the top of the next inning, Centre Field on Big Money made two good catches of fly balls for outs #2 and #3. #12 from Big Money had a nice hit up the centre to start off their hitting, and their girls did well to load up the bases, but didn’t manage to get batted in. Bottoms Up had a good start to the inning, with 2 straight outs in spite of the honking of a car alarm. The car alarm actually seemed to help their fielding, since they let a few Big Money team members on base, even while Rover made a sliding snag but couldn’t quite get up to get the out at Second. The game ended with a routine stop by Shortstop, stepping onto Second Base for the last out.

Congrats to Bottoms Up for moving on with a 10-1 victory!