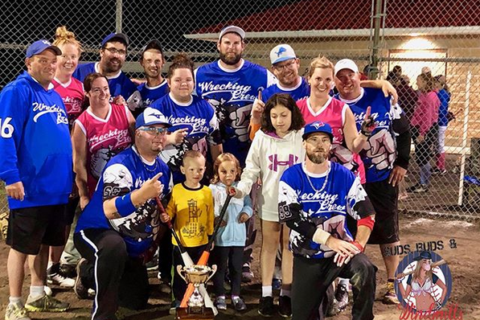 After an epic win in the semis The Crew manage to defeat an Empire and reigning tournament champs and are up against an undefeated Jager Bombers team. It has been a long and grueling day for both teams with The Bombers coming in with their third game in a row!

The Crew take no time to get the game started with a leadoff single.  After a few more hits The Crew draws first blood. A double play attempt at one to end it is dropped by the Bombers and The Crew capitalize on it with a 2R Bomb to right field. Bombers pitcher Curtis with a snag and flick to one to end the inning, Crew  up  4 – 0. Bombers turn to answer back. Getting a few hits with a great shot into right field to score a run, but the Crew lock the D down, 4 – 1 for the Crew.

Top 2 the Crew use their second homerun for an add-on run, but the Bombers shut the door after that stopping the damage. 5 – 1 Crew. Bottom the Bombers get the bats going and get a 2 run jack. The Crew go in to damage control and pull a double play to get out of the inning. 5- 3 Crew.

Into the third with the Crew up Bombers come up big on D. The Bombers Lady at 3b with a snag and a rocket to 1B for the out! Curtis manages a K for the second out and  then the Shortstop for the Bombers with running dive catch behind second for the final out of the inning and holding the Crew back. 5 – 3 Crew.  In the bottom Frame Bombers get on with a lead off hit and Captain Jason Bond with a double to cash in a run.  Bombers keep pushing and get another run but the crew  shut the inning down with a snag of their own from their lady at 3b with a laser to 1B. Tied Game 5 – 5

Into the fourth Bombers center fielder comes running after a ball and attempts the layout catch but just misses.  Bombers to manage to later on pick off a runner being sent home. The Crew use their final home run to for 3 runs, putting the crew back up. 8 – 5. On the bottom frame, the Crew manage to lock the D down and pick up another double play to close out the inning with no damage.

Next inning we see more small ball from the Crew to push up 3 runs. 11 – 5. Bombers up in the bottom frame shut down nice D by the crew with a great line drive snag at 2B and Captain Brad Brewer at Pitch with a snag on a hit back to end the inning.

Bottom 6 the Crews D still locking it down. They get a quick 2 outs but the Bombers start a small rally  score a run with two outs. The Crew come through and close it out keeping the damage at 1. 11 – 6 Crew.

Top 7. Bombers manage to get the leadoff batter, but the Crew fire back with the next two batters getting one.  The crew manage to score two more run off a nice liner to the fence.  And with a bit more small ball the Crew put up another to get 3 in pushing the score 14 – 6 for the Crew.

Bottom 7 scores 14 – 6 for the Crew. Bombers start off strong with a leadoff single.  But the Bombers fading hit into a fly out and a fielder’s choice. The Crew ‘s D too strong for the Jager Bombers manage to close it out and win 14 – 6!