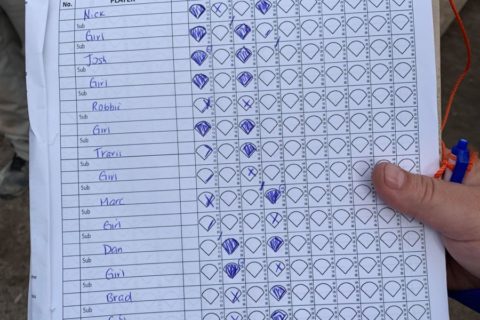 1st inning: pink team gets a couple chicks on base, and then blue dude (66) knocks it over the fence. French team finally makes a play when the first basemen snags a fast ground hit and gets a dude out! Unfortunately the French team fumbles a few in field plays and the pink/blue teams gets in a few runs! Including Le Vétéran who fumbles an in field pop fly. The chicks from both teams definitely ran this inning.
French girl (83) cracks a decent outfield fly but another chick in the field runs like crazy and catches it! Lachap cracks a nice line drive and makes it on 1st. Pink/blue comes out of nowhere and makes a triple play!!!! #9 snags the second basemen out running to third, touches second base and then whips it to first getting the runner out too!
2nd inning: a damn chick on the pink/blue team (13) cracks it over the fence!!!! Yellow left fielder makes an underhand basket catch getting #66 out. Bienfait starts the first hit off for the yellow team by cracking it high and making it to first. Little yellow helmet girl pops it right over rover and moves the the runners. #9 make a flashy play again and snags 2nd out! Little yellow helmet girl makes it home!!!!
3rd inning: Le Vétéran missing a grounder and let’s #13 get to first. #24 hits a fly ball, gets caught out (by a green dude #20), BUT two people run in!!! Yellow team fumbles in field, misses first base throw and let’s #9 get to second. #20 makes another catch, but let’s more runners in afterwards.
4th inning: Le Vétéran hits a nice ball, but superstar #9 catches it. El Grand bangs it out right field and gets a home run!! #18 blue dude bangs it out over the fence. 2nd base yellow girl makes a nice snag and gets the runner out. 3rd base yellow dude (El Grand) catches a foul ball and stops the runner! Home run girl on pink team (13) hits a ball right over El Grand (who jumps to try and catch it) and makes it to first. Out fielder yellow girl (Alou) snags a ground ball and whips it to Le Chap, who unfortunately cannot stop the runner to home plate.
5th inning: the pitcher catches the little yellow helmet girl’s fly ball, and gets the first base runner out too as he ran off the base!
Score: 17-1 for the Pink/Blue team