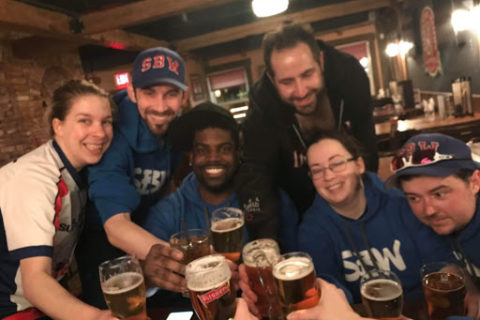 Our next game saw another play-in game between SBW and MSK. Both teams have been playing decently lately, and this should’ve been a good one, but really turned out to be a one man show. The first half saw a lot of opportunities, but only one goal; it came from Dylan Cundell as five minutes in he would rip one to the top corner. That’s how it looked at half with SBW up 1-0 and leading in shots as well, 15-11. The start of the next half saw Cundell go end-to-end and finish up top, 2-0. Cundell would complete the 2-period natural Hat Trick as he worked it along the wall, cut to the middle and backhanded it far side making it 3-0, with plenty of time left. With a little under ten minutes left, Tania Drouin would inject some life into MSK as she would blast it from the point, through the five-hole, 3-1. A minute later, Cundell would exert his dominance on this game as he won a face-off, took the ball to the middle and backhand it past the keeper, 4-1. With time winding down, MSK would yank their tender and SBW would put one into the empty net, this time is was Jake Miron as SBW would take this one by a score of 5-1 and live on to play another game against Dekes of Hazard.

Stars of the game:

This SBW over came to win the following:

Our final game of the evening saw DOH taking on SBW, in this fairly close contest. DOH would open the scoring as Sara Ruggiero would wrist one home in the slot, 1-0. Jonathan Levy would even things up as he snapped one from the wing that hit the tender and went in, 1-1. Dylan Cundell would go back-to-back getting and extending the lead. First, he would get a loose ball and muscle his way to the front of the net and swipe it in; he would follow it up by muscling his way past the D and tapping it in from a bad angle, 3-1. Ken Wardroper would get his team a little closer to even as he snapped one past the keeper from half, 3-2. Marc Belisle would blast one home from the point, extending his teams lead, 4-2. That’s how it looked at half, with SBW holding the edge in shots, 18-13. Cundell would complete his Hat Trick, swiping in a rebound out front, 5-2. K. Wardroper would add another one as he banged in his own rebound off the keeper, 5-3. Cundell and K. Wardroper would exchange goals once more, but SBW turned out to be too strong on this night as the punch their ticket to the finals next week upsetting the top seed.