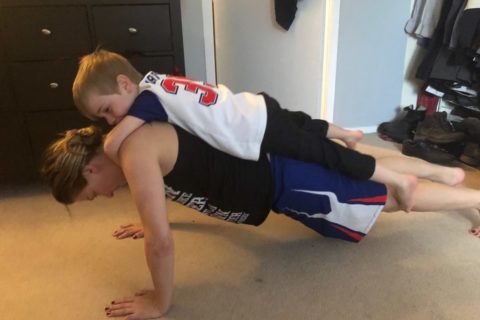 Suds, Buds & Windmills vs Krystle (Soft Dump in the Corner)

Our next game saw SBW taking on SDITC, where Dylan Cundell was making his HTBHL goalie debut and Co-Captain Krystle of SBW was sparing against her beloved team.

Man sized Dylan would borrow quite possibly the smallest gear we have seen, having Claudia and the Buds joke that his gear was borrowed from her (Claudia being SB Dubs smallest player in Franchise history and Dylan being up there with America for shoulder span). Though looked awesome rocking Craig Anderson’s stick.

Just a few minutes in Kevin Maloney would beat Cundell with a wrister, low blocker, making it 1-0. Dylan would shake it off and the rest of the half the keepers were perfect as they got shelled from the multiple power plays predominantly on SBW’s side.

New comer Bud Sonny would take a classic “high stick” penalty trying to wrap around ice hockey style & Claudia would get up in Ken’s grill but otherwise penalties were pretty one sided.

SBW held the edge in shots, 15-11. About ten minutes in, Eric Delisle would even things up on the power play with a sweet feed from Sonny – blasting one home from the slot. Not having Krystle shadowing him on the back end of the power play pays off!

Roughly five minutes after this, I (scorekeepers) would see something I never thought possible as Krystle would give SDITC the go ahead goal as she redirected a pass into the net giving her Not Team the 2-1 advantage; all the while Captain Eric could be heard yelling to watch her sneaking to the back door.

With a few minutes remaining, Maloney put the icing on the cake as his team won the face-off and he beat the keeper from his own side of half giving SDITC the 3-1 victory. And in a strange twist of events, Krystle would get the Game Winning Goal, against her actual team… what a game!