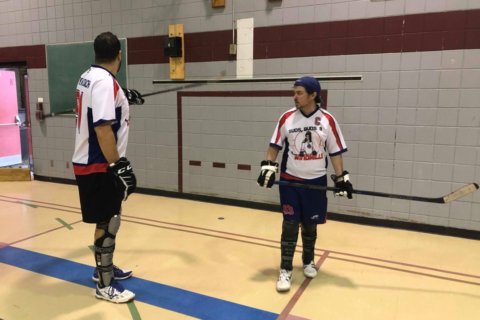 SBW were taking on HSK in our next game, which saw the trend of close ones on the night. The first half was fairly tame, as players were shooting, and goalies were saving. Except for when Ryan Daigle buried his own rebound. That’s how the first half wrapped up with HSK up 1-0. They also held the edge in shots, 18-15. Just a couple of minutes in, Jake Miron would bury his own rebound, making it 1-1. About four minutes later, Justin Potenza would get a shot on net, it would hit someone, and he would pick it up, step to the side and bury it giving HSK the 2-1 lead. Both tenders were playing strong and giving each team a genuine chance to get the W. With under two minutes remaining, HSK would get the advantage as a nameless SBW player, you know who you are, would get a high sticking infraction. Potenza would be “Johnny on the spot” burying a rebound, from a point shot, giving HSK the 3-1 lead and eventually victory.