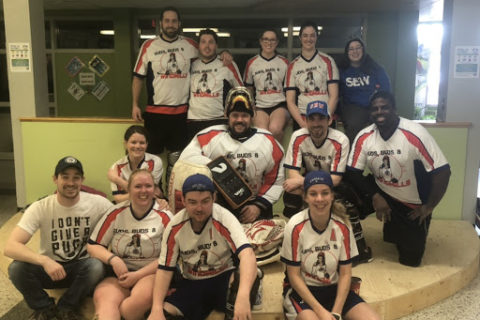 Our next game saw Suds, Buds & Windmills taking on FO, in a game of familiar foes. FO who hasn’t bothered to show up all season would decide to BRING IT ON like a bad 90s cheerleading movie that we all secretly love. Wouldn’t matter tho’ cause Jake would be all “uhhh unnnn” and opened the scoring, just four minutes in, as he would wrist one from the wing, hitting the goalie and going in short side, 1-0. Buds would cheer louder than usual since the Dylan curse was broke! Plans to have Dylan sit in the hallway during Jake’s playoff shifts could be put on hold!

A couple of minutes later, Other Eric from FO would snap one home from the point, 1-1. Four minutes after that, not needing his line partner at all, Miron would snap one in from beside the net, 2-1, with the curse broken , the flood gates were open and Jake knew it. It took almost seven minutes for the next marker as Ryan Asstasstic ( “urgh Asstasstic is here? I didn’t wanna run this game, urgh he’s so fast! – Dylan” ) would steal the ball and wrist it home. With thirty seconds left in the half, Dylan Cundell would give SB dubs the lead as he beat the keeper with a wrister from his own end and Jake gave a lil hop to avoid it. That’s how it looked as SBW were holding on to the lead at the break, 3-2. FO held the edge in shots, 16-14.

It took about six minutes into the second half until Jayme Albert of FO would steal the ball, and send a backhander far corner evening this one up at 3-3. Well I (scorekeeper) thought this was about to go to a shootout & I wasn’t the only one, with .8 seconds on the clock Jake would mail it in and start to walk off the court as Kelly decided to put everything she had into gaining possession behind the opponents net. A female player (unknown) would try and blind clear the ball but give it directly to Dylan, probably the last guy you want having it in all of HTBHL. Cundell would get the game winner as he batted his own rebound in to give SBW the squeaker win, 4-3 and lock in his top scoring title for the division. Levy & Krystle would go out to give congratulations not knowing there was .2 seconds on the clock. An unnecessary ball drop would follow and then the whole team would celebrate a second time.