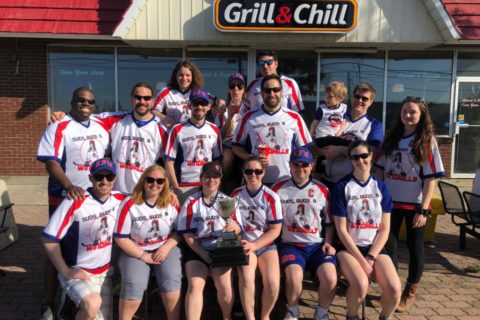 All hopped up on energy drinks, the promise of Dairy Queen & the energy of recently changed Facebook profile/cover photos SBW’s walked in ready to take it all. HTBHL must have known that a bus load of fans would be in attendance because the Sports Table area was renovated and had more space and better “boards”. Fans: Baby Bud Blake, David, Lanne, Mike, Riel, Heathers sister Alison & their Mama bear (who was our only and greatest fan when we played low level softball , she seriously never missed a game!) all cheered loudly and were instrumental in the game’s outcome. Here we had it the High-B finals, with two teams that played very strong all year. SBW was taking on BDB, in the battle of the three-named teams. With less than a minute already played, Krystle would one-time a pass in front past the keeper, 1-0. About ten minutes later, Krystle was at it again as she wristed one home from the slot, 2-0. A couple minutes later, Dylan Cundell would put a filthy wrister past the keeper but not before Levi would take a high stick penalty, I personally blame playing men’s and arena but his excuse is missing his line partner Kelly Hall. . That’s how it looked as SBW were up 3-0, and also in shots, 12-6.

The second half was goaltender heavy as they were stellar and stopped all but two shots. “Make Miron” would give it his all on a backcheck but Steven Howlett aka as their Dylan would cut to the middle “and tap it past the sprawling keeper, 3-1. Cundell would get cut to the middle and finish off Krystle’s weak shot on net, but let’s call it an assist as he wristed it home making it 4-1. It should be noted that all the ladies esp the fwds took it upon their selves to mark Their Dylan, Emilie & Heather got pesky while SarahZ, Claudia shut him down or forced wide shots once he came into their zone.

In the final minutes of the game OUR Captain Eric Delisle would give his defensive spot to Dylan in order to aid in protecting the lead, he moved to the front and had to be reminded of that “ERIC, YOURE A FORWARD” –Claudia.

Well if you can count, which I’m guessing is yes, you know that is all the goals scored this half as defense was stellar on both ends and so were the masked men as SBW take the High-B final, 4-2. “Jelly Hall” and fans would all rendez vous for ice cream.

There’s nothing more to add. Krystle did all the work & we just road her back to the championship – Levy