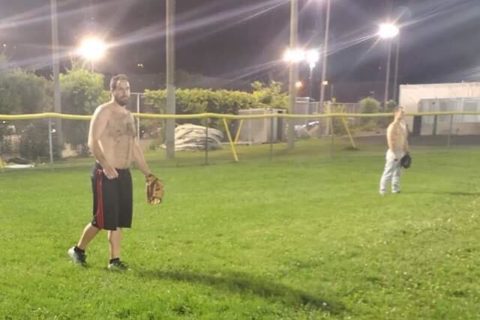 Late night game against the ESM boomers, best of the B div. We had two call ups from the Rec team making their comp debut with comp in Kim and Biju! Both running straight over from a rec win – Kim might have lost some stuff along the way. After a bit of a delay for all the Buds to filter over, SBW kicks it off with some small ball to score 3 runs with the D holding it down to 1 against. Dallas taking a night off at Catch for Krystle was more then happy to make Captain Eric dance trying to catch the throwbacks. Of course it was his fault for not being tall enough to catch the throws.

Second bottom of the order loads up the bases for Dylan Cundell to crush a line drive out the left field for a grand slam! Inning ends with Alex sending Krystle home and getting gunned down. We might need to re-evaluate Krystles top run speeds for pushing bases. Kim takes over pitching from Captain Eric who for whatever reason is wearing a red SBW ball hockey jersey. He claimed it was something to do with peacocking. Alex in for Justyn with a Y makes a good gun down from Short to Melodie at 1B. Michelle O also rocking the ball from 3B all night long with some great throws!

Third inning things break way open with the Buds crushing hit after hit after hit. Biju with a monster jack straight away center and the boomers manage no outs – big 7 spot! Bottom of three, Dylan at third makes a great gun down to 1B, making up for last weeks out of play throw! Biju also goes and shows what he has by making an amazingly great diving catch in shallow center field to end the inning hold off any damage.

Fourth inning bats go a bit cold, but the Buds manage to grind out a run. Not to be outdone by Biju, the Boomer’s Center field also makes a great diving catch and absolutely robbing Kim on a great hit. Bottom of the inning Boomers come alive putting up 6 runs. (Incidentally one captain was sitting and one was playing shortstop) Michelle with more great throws from 3 to 1 and Kim getting the outs to end the inning.

Top of 5th and last inning called, Buds come back fired up with doubles for days and putting up 8 runs in the open inning. Looking to lock it down Captain Eric manages to run down the captain of the Boomers caught between bases at second (great toss in by Pete to make it happen). And to cap it off Pete shuts the game down with a fly in left.

A little Post game BP to work on Pete’s batting mojo – though notable mention to Kim hitting the top yellow of the fence with a hit – Soooooooo close. Also notable an E-mail from Mark Fish for players to keep their shirts on lol.