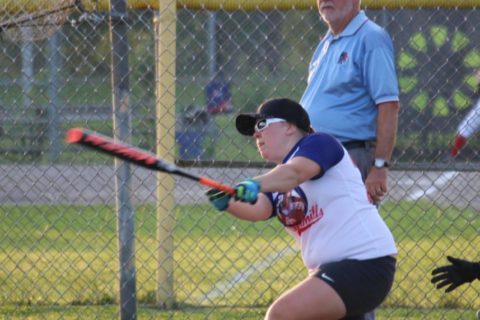 Tuesday night. 9:45pm. Usually I don’t get to go out this late so this was really special for me. It was a beautiful evening. Not a cloud in the sky. A little bit humid but I don’t mind. I was just happy to be here and hanging out with my favorite people.

Bugs were whizzing by my head. I took a stab and tried to catch them but I was unsuccessful. It’s almost like a game, trying to see if I’m quicker than they are. They won every time. But that’s OK. I was just happy to be here.

There were the usual familiar faces tonight, but also a bunch that I didn’t recognize. I’m always a bit weary of people I haven’t met before. Nothing against them, it’s just the way I am. I usually warm up pretty quickly though, and then I will probably annoy the heck out of you.

There was also a softball game to play that I momentarily forgot about. There’s just so many sights, sounds and smells around me that I nearly forgot. Sometimes I’m forgetful like that, but I always remember.

Thank the heavens that snacks and water was packed tonight! I love to eat so having a little treat here and there really makes me happy and keeps me focused. And with this heat you have to stay hydrated.

Oh right, the softball game. Well, we didn’t do very well, that much I CAN remember, but I don’t like to remember the negative things. All I know is that I was outdoors on a beautiful night with my friends. What more can you really ask for? I saw plenty of smiles and laughter and chatter so I know everyone else was enjoying themselves too.

Oh, and remember those new faces? Well they turned out to be great. They were so nice to me and we had a great time together. I was a bit spooked when a couple of them approached me but I got over it pretty quickly.

OH! And then Kim came by and surprised me! It was a short visit but man was I pumped about that.

Well, that’s about it for another Tuesday evening at the diamond and we all parted ways. It was late, and I was tired, but I was just so happy to be here.

Written from the perspective of Floyd, the dog.