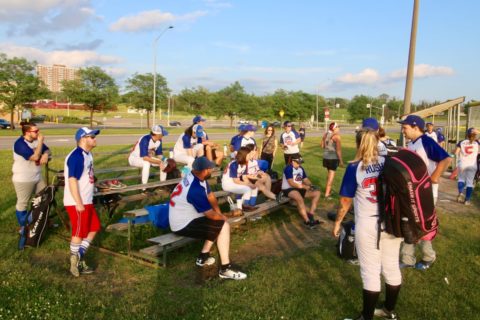 By this splendid Friday night outside, SBW Beer Eh played against the Base Invaders. FTG was subbing for us for this game. We started the game defensively and the first thing we noticed obviously was the poor quality of the opposing team’s bats, shitty aluminum bats so we played shallow in the outfield for that reason. Dallas ran from her rover position to catch a ball behind 2nd base. Offensively, Bells started the game with a leadoff homerun in center field and 3 singles from Alex, Krystle and Jamieson gave to Kim a bases loaded situation with 1 out. She jumped on the occasion by slamming a solid hit over the head of the right fielder for a 2 RBI double and we ended the first inning 3-0.

On 2nd inning, a hit by a Base Invaders player surprised Bells by going a bit deeper but he’s still managed to catch the ball for the second out. FTG started with an opposite triple jogging all the way to 3rd base. He went home on Tiana liner to SS for an single and Guillaume hit a fielder choice. Rush hit a single, Bells and Dallas hit  a double to produce each a run, Alex and Krystle hit a single to give again to Kim another bases loaded situation with 1 out. The Base Invaders right fielder didn’t get his lesson on her first hit and she repeated with another strong hit over his head for another 2 RBI double to end the second inning 10-0.

Krystle had some action at SS on the 3rd inning, at she caught a grounder and threw to FTG at second base for the 2nd out and she caught a pop fly for the 3rd out. Eric hit a solo homerun to start the inning offensively, Sarah and Tiana showed discipline at plate with both a 2 bases walks and FTG hit a double with a grounder through center field. Rush hit a double after and she scored on Bells double and we finished the third inning by leading 15-0.

The 4th inning saw Guillaume catch pretty much the only ball hit to him at left field during game for the first out. Kim pitched a strikeout to a guy and Sarah and Krystle worked together to end the inning with a out at second base. Alex missed his throw to FTG at first base during that inning, but without damage.
Kim and Eric hit a single and Sarah hit a fielder choice at SS for the first out. FTG almost hit Eric’s head at second base with a line drive single but Eric luckily avoided it. Tiana showed again some patience at the plate with bases loaded and she got a 2 bases walk to produce 2 RBI. Guillaume was out and Rush got on base with a hit and scored on Bells double before Bells got caught by surprised by SS on Dallas grounder to end the inning. SBW added 5 runs to improve the lead to 20-0.

Dallas did a great catch at center field on the 5th inning and Alex caught a pop fly at 3rd base, and we saw some interference on a grounder play to Krystle as Base Invaders runner was on the line of play, but yet again, without damage for us as we didn’t allow a run. Krystle, Alex and Kim hit a single, Krystle scored another run on that inning and after 5 innings we were leading 21-0.

The girls got all the outs on the 6th and last inning by Base Invaders with Kim grabbing a ball on the mound to throw out at first, Tiana get one on first base with a grounder and Rush caught a ball at rover position.

Shootout to Kim for her brilliant pitching with 3 strikeouts and her 2 crushing doubles with bases loaded for 4 RBI overall for the game. Marcel, Guillaume’s favorite ump refereed the match and SBW Beer Eh had our fourth win this season on five game played so far.

Some SBW players took the road after for Pembroke for the weekend for cottage and co-ed tournament in support of Pembroke Kidney Walk and The Kidney Foundation of Canada.