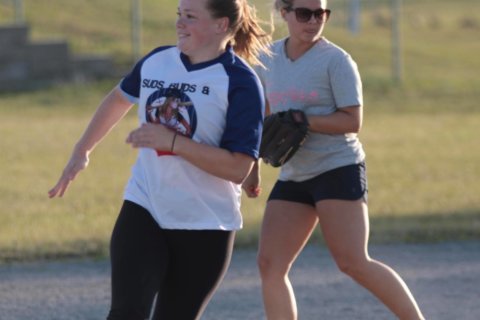 It was a gorgeous night for Softball in Ottawa, and the weather was much better than anticipated (cloudy forecast). The Bats Outta Hell came out strong and need to tip my cap as they performed exceptionally well on the defensive end and kept putting the ball in play. Despite being equipped with elite outfielders Aaron and Frank, balls were hitting gaps. Although the pitcher was throwing high heat, SBW softball players could not piece it together on the sticks, hitting the ball hard but kept getting robbed by members of the Bats Outta Hell defensive core.

I have to mention this as it was the only run scored, humble brag, I managed to get a piece of one on my first at-bat that carried over the fence in centre. The Ottawa softball SBW members saw this as an opportunity to rally back, but the comeback was short-lived that after a couple singles, more robberies took place defensively on the opposing side.

Strong pitching performance by Kim was outweighed by some hot bats from the opponents. Matt did not deceive defensively with some TSN highlight plays from shortstop and a couple of close plays at first were saved with the hot glove of Mike.

This marks the end of a great season for SBW in Ottawa that finished at the top of the standings and despite being upset in the quarter finals, put on a constantly strong performance throughout the season. It is now time to take out the golf clubs for the next month before we get attacked by 9 months of winter, and then a new chapter begins.