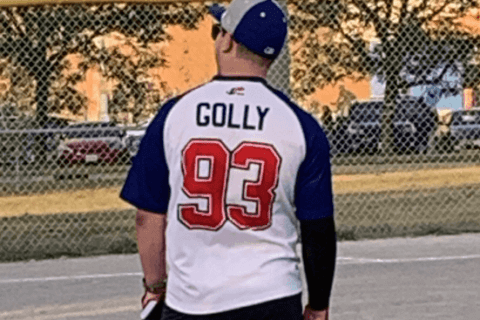 Rookie Aaron here…. I’ll give my best shot at a post game!

What a beautiful night for some playoff BUDSBall! It was a high pressure playoff game where the loser goes home! The BUDS did NOT want to go home.

The Buds started off the best way that any team could start on defense…..3 UP 3 DOWN…or should I say….4 UP 4 DOWN!
In the bottom of the inning, Eric G starts us off with the worlds most confusing and longest single of all time. Mike yells “WALK IT OFF” Coach Frank yells “RUN IT OUT”, It was the battle of the coaches voices….. and Eric seems to hear Mike’s voice (coaching 3rd) a bit louder (weird eh?) and turns back to pick up his bat. He turns back around to the rest of the team yelling at him to run to first as the ball fell behind the CF and hits the top of the fence. What a start….a 5,879ft SINGLE , atta boy Eric. The picture for this post game tells us exactly how he looked on first base after that. Not to worry however, the Buds got on the board with one of many all-“Starr” hits.

The Buds defense stayed solid through the top of the fifth…and the offensive began to wake up too! Aaron (some new kid) started us off with a bloop single (his specialty) and Mike cleared up off the bases with a 2 RBI Infield HR (with maybe one small throwing error ;)). Starr got yet another great hit (2B),Sarah Rose then moved her over to third and Eric G drove her home with a deep sac fly. The opposition hit a long 3 run blast in the top of the sixth.

Heading into the top of seven the score was 7-5…..OR SO WE THOUGHT!!!!!!!……….
The opposition scored one run, but the Buds recorded their third out. We lined up the shake hands…..but Derek Jeter from the other team started telling us that the game was tied 6-6 now…..
NAH Jeter….. learn to count. The Buds showed their scorecard proudly and took home the win on what can only be known as one of the most confusing nights in playoff softball history…