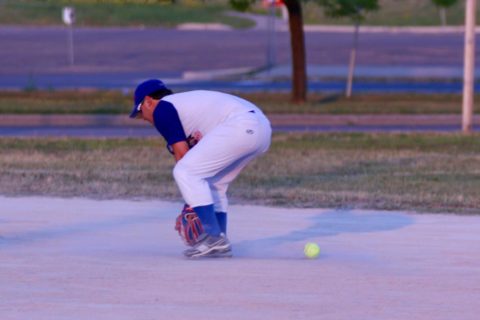 A 9:45 pm game. After a long weekend. Are very hard games. The Buds were down a few bodies as one could imagine and needed some reinforcements. Also a special guest star from the Heather fan club, Riel to watch the game!

Starting the game off Eric G deciding to try something new went with the new purple bat he thought looked pretty and was reward with a ground rule double as the ball had enough front spin to jump over the fence. Followed up by nice hit by Claudia to get on and finished off with Mat and Dyllan hitting in 2 runs to get the Buds the board. The D was a bit slow to get going, getting used to the flood light and the high humidity. Captain Eric filling in For Kim at pitch had some big shoes to fill. Maybe no Booms but did manage a K. But the highlight of the inning was Dyllan at one 1B being heads up and throwing the ball home to Sarah-Rose to pick off a runner trying to take home, saving a run and getting a needed out. First inning ending closing 3-2 for the Bats Outta Hell.

Back to work Eric D manages to get a leadoff double. Stringing together a few hits Buds manage to put up 2. Bomb hit from Heather into the outfield. Buds trying to hold it down with some Kim magic for some more Ks and Matty at short with a nice line drive snag but the Bats kept even and also managed 2 runs keeping things tight.

Top 3 Keeping the Eric leadoff streak alive with Eric G up, he also kept the leadoff double streak alive! Following with Matty driving him in for a run and some good hits from Claudia and heather to keep the train moving and putting in 3 runs. In the bottom the flood lights start to play tricks on the umpire as well! With a throw to 1B the umpire we all think called safety, but the base runner felt different and walked off taking the out. Shortly after another questionable call were Dyllan lifting the ball up for possession looking for the out was denied with a safe, though he had the girl by at least a step. Moral of the story is you have to let the umps call the games and hope the calls go both ways but regardless the Buds got out of the inning only giving up 1 and taking the lead 7-6.

Fourth came around and the Buds bats have a power failure. Frank taking his turn manages a leadoff triple but the Buds couldn’t cash him in. Fortunately the Buds were able to lock the D down and hold the Bats off. Captain Eric being chirped by the gallery for hopping to catch a line drive, but Claudia center in the D getting a force out at 2B and making a stop and getting the out at 1B.

Fifth inning and 5s all around! Buds come firing back. Scott getting the party started and Matty with a nice 2 RBI hit, Heather continuing to pound center left. And a shout out to Krystle with the aggressive base coaching to squeeze in some runs. Not to be outdone The Bats dug down deep into to bust 5 runs of their own outta hell. Keep even the Buds still manage to hold on to the lead 12-11 going to last inning.

Last call – Back to lead off Eric D up and kept the Eric streak alive with a double. Game still close in the balance, Frank cashes him in. With 2 outs and only 1 run in Aaron gets a big hit to turn on the engine. Followed up by Sarah-Rose with a great shot into left field cashing Frank. Scott almost had a long ball but it hook just foul at the end instead with no strikes to give crushes a ball to left-center alley. The hit parade continue as the flood gates open with hits from Claudia, Eric G, Mat and Heather and getting big hits scoring a run. Krystle coaching 3B of course sending people home, trying to send the game home. Buds come up big with 7 runs in the top of 6, 6 of which were scored with 2 outs which is some clutch hitting and very reminiscent of the A teams game at 7:15 in the last inning.

Looking to close the game out, Buds are off big with Claudia catching an absolute rocket to 2B – putting her goalie skills to the test and looking generally un-phased. No Patrick Roy look what I found in my glove moments unfortunately. A little Kim boom magic gave the Buds the second out. And to close it out 3 up 3 down a moment of redemption for Aaron out in right field who tracked down a high hanging fly ball for the only out that matters – the last out to lose out the game.

-Kim (as written by Eric)