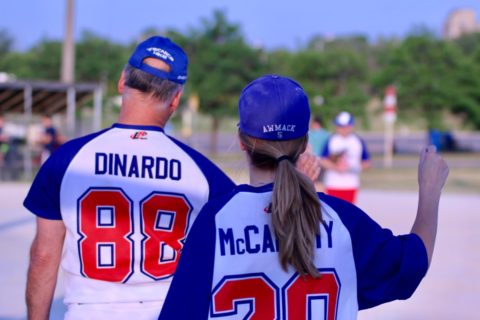 Pitch Please, is it a request for a pitch or some fun word play with all sorts of sass. The Buds actually got to find out this time as the best of the B decided to show up this time! It was also a welcomed return for Bud’s short stop Justyn with a “y” after being off for a month with a hamstring injury.

Game starts off with Alex Thomson doing his job and landing a 2b walk. And with two on, Justyn with a Y makes his return with a 3 run shot! Buds start off with 3. Pitch please answers back with a solo. Justyn with a “y” getting tested early on D with a fly out to short. 3 – 1 Buds.

The second had things continuing a long as the Buds playing some small ball generate two more runs, extending the lead to 5. ON the bottom half the Pitches got locked down the D with Justyn with a “Y” again and some D magic from Captain Eric up the middle. 5 – 2 Buds.

Top of 3 and the Trap is sprung! Captain Eric hitting a oppo shot to the fence at center right gets gunned down trying to leg out a double. After which the Buds get blanked. Bottom end the inning the D comes through and holds the Pleases to 0 with some great catches from Pete in left with two big catches.

Fourth comes around and the Buds bats are stalled in neutral. Two hits but no runs. Back to the Justyn keeping it going and Captain Eric giving up two home runs, one for a run and one for an out to end the inning, 5-3.

Buds look to get something going in the fifth with a lead-off double from Zachary, but stall out again with three straight outs. In the bottom the Buds D starts to break. 3rd Baseman Michelle O stops an absolute rocket though for an impressive out. The Pitches score 3 given them the first lead of the game and the Ump calls last inning! 5 – 6.

Last inning, down a run and the bats haven’t brought in a run in the last 3 innings. Games sometimes come down to moments. In this particular case a call. After the first two batters getting out, Alex Thomson hits on with a double. After that put Sarah Z was up to bat. She hit a grounder and ran it out. In baseball they say ties go to the runner and this one was as close as you can get. The umpire called safe and the other team may have been herd saying pitch please. Sebastian hits Alex in to tie the game with a nice double to center field. And then the bats start to come alive. After a few more hits Tex comes up to bat and center field playing rover depth. Eric coach one yells “Dallas Green light”. Nothing. Eric again, “Dallas green light”. Dallas looks a bit confused and says I can’t hear you. Eric again, “Dallas green light”. The catcher for pitch please say “I think he says green light”. Dallas looks over to center field and see the situation and says happily “Oh, okay!” and with-in seconds turns on a ball sending over the center field fence for a 3 run homer! Buds go one to break the game wide open with a 6 run inning pushing the score 11 – 6.

Now with a 5 run buff the Buds have to lock it down. The Pitches started to build up some steam, with a solo home run and started to put up hits. Captain Eric gave some pitches of his own for two Ks and a recurring story with runners on base to tie the game Pete in left field makes the final catch of the game to seal the deal.