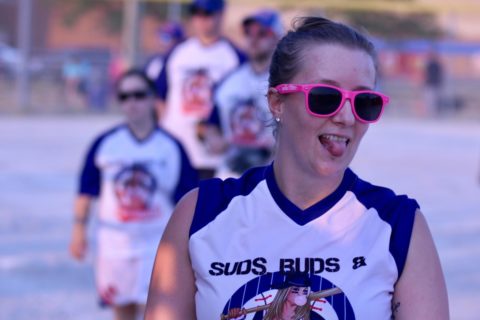 It was a beautiful night….the sun was shining, the humidity was bearable, and the drinks were cold! Beer Babes hit the field with smiles on their faces and positive vibes to take on Just ATip. But positivity wouldn’t save us……

In the first inning, Mills was playing Right Field and fucked up and let a ball go right between her legs….not to worry though, Drew didn’t let her forget it for the rest of the game….she never missed another one! But she also didn’t get any more action out in Right Field. She is clearly out of practice and needs to get her ass to more games….DAMMIT MILLS!

The ladies stepped up their game at Bat where Thom had an awesome hit and made it to 1st!! WOOOO!!!!

But, to be honest…the author of this lovely Post Game has been working two jobs and 70hr weeks and completely forgot everything else that happened at that game. So here is the version that she and her BFF Marc came up with.

It was a magical evening. Colorful skies…colorful skirts…and nothing but beautiful babes rockin it in the outfield. Lyndsay took on a new look…she sprouted wings, an epic horn and a thirst for balls….catching them that is. Everywhere you turned, there she was. Majestic in her height and shimmering rainbow colors through her wings. The sun would glisten across her wings as she leaped catching ball after ball at Center field. But it would be the white pants that would catch the eyes of the spectators! You know what I’m talking about!!

After turning their gaze to that fabulous center fielder the score of the game would be lost. No one cared who Won or Lost….we all just wanted to stare at the Majestic Unicorn Creature that is the one and only Lyndsay McLean.