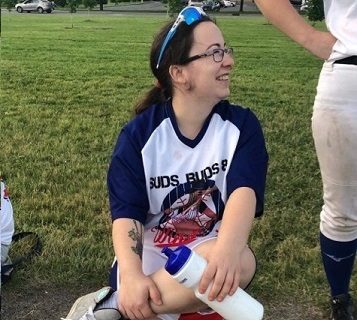 The Ottawa’s Suds Buds and Windmills Beer Eh, simply looking for a casual  Friday softball night game, were flabbergasted upon arriving at the field. With a grand total of maaaaybe three regular players, these Sons of Pitches called in spares from far and wide. Now…we’re talking about the best of the mediocre. I mean it is slopitch right.. Despite what every jacked up SS dude thinks, this isn’t the big leagues.

Starting the game off with JP scoring the only run of the inning, we knew at least we wouldn’t get skunked. Sunsabitches fought back with 3 runs to take the lead, but it wouldn’t last for long. After the second, where both teams scored 5, SOP were still up by 2. Things got interesting in the third, as SBW fought back with 5 more runs, and held SOP down. SBW kept the lead until the very end. Did I mention Marty made a triumphant and overdue return to the Mother Team?

Even Old Man J, the beauty, got in on the action. It was the top of the 6th inning, and Brad (1B) was distracted.. Staring longingly into the Walmart parking lot, dreaming of the love of his life… His soulmate.. His truck. Squinting ever so desperately at his tire, with a look of both pure disgust and heartbreak on his face, almost inaudibly he whispered, “Is that pee on my tire?”. Brad ruins his near perfect fielding percentage, and misses a routine throw to first. Even Krystle would have had it.

It wasn’t until the very end that things started looking up for SOP, as one of the few OG players on the team finished the game with a walkoff. After a long hard rollercoaster ride of a ball game, SOP got to celebrate like nobody was watching. They formed a circle and jumped around screaming and giggling. Like a group of school girls ushing and gushing about the new boy in class. That was half true, though, there was definitely jumping and screaming and giggling. Final score was 17-16 for Sons of Pitches.

Krystle, playing it off like an absolute UNIT, managed to catch a ball with her lady bits.
JP cracked under the pressure of filling in for Krystle at shortstop, but looked good doing it, so it’s safe to assume that someday Krystle will forgive him.
Dallas finally got her own jersey!
Most SBW, guys and gals alike, hit straight to Dan in the outfield. I’m requesting game footage cause that man either teleports to the ball, or rigged the ball with a magnet. Stay tuned.
Bells graced us with a glorious, and much needed, grand slam.