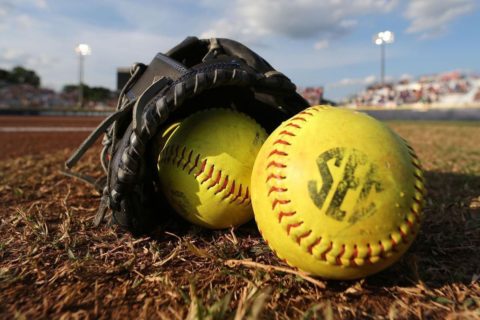 As darkness sets in to start of the late game of the night, SBW heads over from there break between the Babes game from the local watering hole with their cheering squad in tow.

Before the game even started we got our first causality. Tiana warming up with FTG took a ball off the knee and some how in slow motion she was laughing and she comically fell to the ground. Most on lookers thought it was funny, Esp Alex to whom she was just saying how she needed to stretch and take care of that knee before the game, but the bruise a few minutes latere was no joke. Cautiously she removed herself from the game in order to ice it and rest it for the weekend tourney where cops with Semi Auto long guns were to appear. (Read more on that here)

The first inning was a quick one, SBW retired Tutti without any damage and Dallas was the lone run to score in the home half of the inning.

Second inning tutti managed to put 2 runs across on a homer, first of many on this night, and SBW had a quick 3 up 3 down themselves. Note that Krystle flew out like a douche bag her first at bat but what’s new?

After shitting on her a little bit I guess I’ll give her some praise now. Starting in the third and she had defensive outs in every inning the rest of the way, including starting a nice double play tossing it to FTG and finished it off with a gun to first. It’s like she magically got french braids done at the bar between games and looked pretty while killing it on D.

The offense never really came through for SBW who couldn’t seem to get more then one run on the board in any inning and while Kim pitched an outstanding game Tutti managed to get some big home runs when it counted putting up 4 runs in the fourth and 3 in the fifth.

Down 10-4 going into the bottom half of the last inning Seb was the only run to come across for SBW. In the end the bats just never woke up for the solid line up that made it to the field this night. Perhaps it was the cold or the late game we will never know but there will be another chance for the Buds later on in the season.