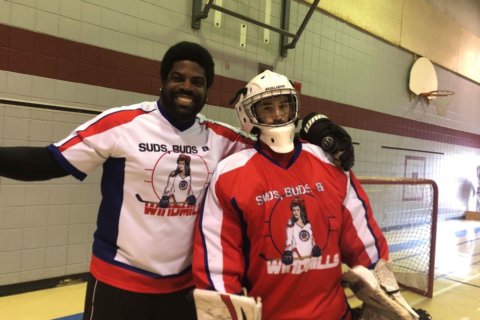 Our next game saw SBW taking on FO. SBW were missing a key piece this year as Dylan Cundell did not return, which left a HUGE hole in their scoring department. It took six minutes for the first goal, and it was SBW who potted goal numero uno, as Eric Delisle intercepting a pass wristed one five-hole, 1-0. FO would even it up as spare, Elise Fournier, would beat the keeper with a shot in the slot, 1-1. About a minute later, Heather would beat the keeper on a sharp angled wrister, 2-1. Three minutes later, FO would even it up as Lee McClenaghan would get a gorgeous pass from SBW Jonathan Levy, who gave him a breakaway, and McClenaghan made it count, 2-2. Shots were at a premium, as FO held the edge 13-8.

The second half saw both teams get a ton of shots, but very little goals. With a little over 2 minutes remaining the proud papa of a new baby girl, Jayme Albert (congrats to you and Luisa), would blast one home of the face-off, 3-2. Unfortunately, just 40 seconds later there would be a miscommunication between the goalie and the defensemen and Bond, Patricia Bond, would tap home the equalizer, making it 3-3 with a minute left. And that is how it would end as FO held the edge in shots 26-20.

We would be headed right to the shootout. Let’s cut to it, every shooter was stuffed, and we were headed straight to the Final Shot. SBW would elect to defend as Captain Eric just finished watching the goalies go a perfect 8/8 and FO would send out McClenaghan. His shot would be initially stopped… but it went up, over and in. FO take this game 4-3 SO.