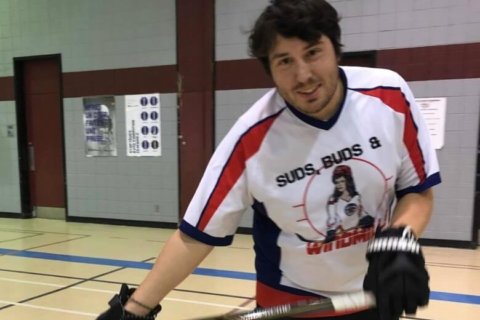 Generally a post game is about the game itself. The score of this game was sadly one sided and not in the favour of SBW but for Gars and Gals. That said before we get on to the real post game I will present some highlights of the game. Jen would make her debut with SBW Ottawa Ball hockey team as a spare and would be a shot in the arm for them as they only had 4 girls for this game. Also a big kudos to Cindy as somehow she was able to come from Montreal after a high school reunion and managed to get through the entire Ottawa Ball hockey game without getting sick even she was as hung over as an actual high schooler after their first night of drinking. Despite the score it wasn’t as one sided as one might think. After going down 1-0 quickly in the first half SBW would go on a power play that really looked like a power play. After some shaky special teams efforts in recent weeks SBW not only managed to keep the play in the opposing side’s zone for essentially the entity of the man advantage but the opposing goalie was also peppered with shots. With Jake Miron leading the charge, save after save was made and many rebound opportunities were shut down but an out standing performance of their tendy leaving many shaking their heads wondering how we would be able to beat him. SBW Ottawa Ball hockey team would find themselves down 4-0 at the half and it would be 7-0 before they managed to break the goose egg.

Jake had been pushing for a goal all game long and finally after tons of chances from him as well as solid play of Levy and emergency forward Claudia, Jake finally found the back of the net with some help from great speed and play making of Jen. With only a few minutes to go Alex would tell Jake “you might as well go cause I ain’t scoring,” (more on that in a bit) and would promptly net his second of the game. That would be the final score 7-2.

Alex hoped in with Jake on the way to the bar and Jake would say “man, I’m really glad I got that goal, put the pressure on me when you said you weren’t gonna score.” Alex being fat, out of shape and not very good at ball hockey replied “it was just fact I didn’t mean to put added pressure on you.” Getting our usual spot at the bar SBW bar team would have a new waitress (at least I hadn’t seen her before) and enjoyed great service and a pleasant nice person that softball players unfortunately don’t always get at their drinking hole. Beer was served and the usual nachos came out. Jake would say “is there cheese on these nachos?” which everyone remained silent for cause um well…. To his dismay of course there was as he proclaimed he was on a 7 day vegan purge and needed to have plant based food only. When it was discovered he had this epiphany after watching a documentary Alex went to the bar chat and informed Krystle, who wasn’t present for this game building a baby and all, that he had pulled a Dave. Krystle would promptly respond with a long list of possibilities of what that could mean. “He watched a documentary, you can figure out the rest,” was the response. There was the usual fantasy sports talk from Levy and even a speech from Coach Riel that was to be engraved in the minds of his pupils as the ball hockey team thanks all deities, aliens, dinosaurs and even some mammoths for blessing us with Jith which ended up making Riel a bud for life as well as our rep for our amazing jerseys!

The usual shenanigans followed and Levy would point out that government workers have the next Monday off and even tho next weeks game starts at 8:20 proposed going to Riel’s after the game to raid his liquor cabinet. Cindy had been talking about her mixology skills all afternoon and was quickly nominated as bartender for the night. Riel would hype the idea up by saying he has ping pong table hockey darts and just about any other normal bar entertainment you could think of selling everyone who had remembrance day off so we could spend the day remembering that many people fought bravely for civil servants to have a day off to recover from a devastating hang over they would never be able to do normally after a late Sunday game. Eventually all would head home after another victory at the bar at least. Jake lent Alex his stick to use for the game and since one time last year he used Dylan’s he would complement Jake by saying “it’s not the biggest I’ve ever had, but it was the best.”

Later on in the night Krystle would message the chat relaying what Dave had said about the documentary Jake had watched. “Was it cause of the penis scene” Jake – “Yes it was!!!” leading all to question not only what was in this documentary but how did Dave know specifically what documentary it was about…. Jake would proclaim #GoVeganFuckBetter although side bar feels like they need more documented proof of concept.

As a former binge watcher of documentaries and audio teaching listener I’m slightly afraid of returning to that hobby now as evidence emerges that I may be inclined to not eat meat anymore or worse…. not drink beer…. There may or may not have been a night or two that I have had a nightmare about starting to watch documentaries again since this experience….
-Alexander