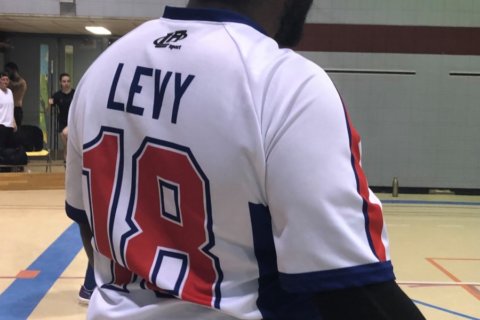 Our next game saw the Ottawa SBW hockey team , playing their second of the night, taking on SDITC, who were getting to break in a new goalie to the league, welcome Danny. SBW hockey team would open the scoring as Marc Belisle would wrist one five-hole. Kevin Maloney would even it up as he beat the keeper with a wrister from his own end; all this in the first two minutes. Well it didn’t hold up to the scoring showcase we all hoped it could be as the next goal came with about ninety seconds remaining as Heather would rip home a loose ball. That’s how it looked at half as SBW were up 2-1, and holding the edge in the shot department 16-13. A few minutes in the hockey game, Amelie Charron would even this one up as she tapped in a rebound in front, 2-2. Spare, Lise Parisien would wrist one up top, in the slot, to give SDITC their first lead of the game. Kelly would jam home a loose ball to make this one a 3-3 contest. With a little over three minutes remaining, Kelly was at it again, as she tapped in a rebound in front, 4-3. With time winding down and shots flying everywhere, no more goals would come as the SBW from Ottawa Hockey team take this one 4-3, in a very close match-up. Shout out to the ladies in this one as they accounted for 5 of the 7 goals scored in this one!