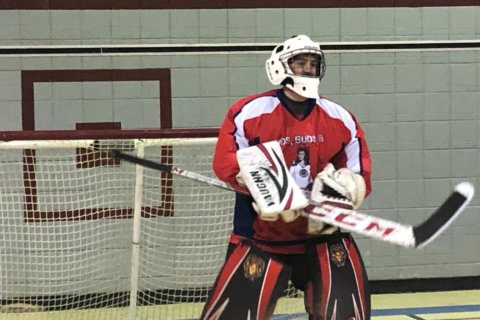 Ottawa SBW Ball Hockey team taking on TPIR in this game that went down to the wire. SBW Ball Hockey team would open the scoring as Dylan Cundell would bury it upstairs, on his backhand. Marc Belisle AKA Bells would be the recipient of a gift as Cundell’s shot went off the tenders head, up and just sat there where it was an easy tap in, 2-0. Before the half was over, Doug Drevniok would chip it far side, off the face-off to cut the lead in half, 2-1. That’s how the half would end up as SBW were up in the score, but that shots were even at 18 a piece.

The second half would see ten minutes expire before our next goal, as Natasha Jamieson would bury the cross floor pass, with a tap in, evening it up at 2-2. There was a little over three minutes remaining when spare, Elise Fournier, would walk in and bury a wrister giving TPIR their first lead of the game, 3-2. SBW were pressing and got some good chances, but  TPIR Ottawa Ball Hockey would get the victory handing our Ottawa Ball Hockey a loss in their first of two games.