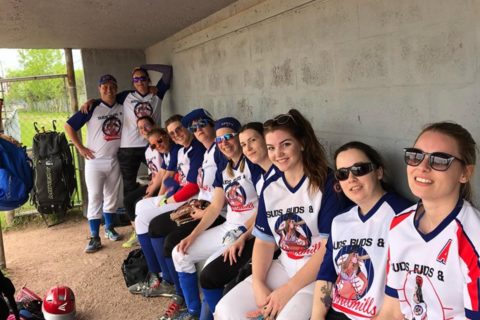 On a drizzling Sunday morning the Lady buds set out to play their first playoff game in the Gatineau tournament. There was no interruption by police with semi auto long guns due to some criminal holed up in the sketchy hotel across the street this time and the game went off without any sort of emergency evacuation.

Jays started out strong strong and their offense put up 14 runs in 4 innings while the Lady buds struggled a bit out of the gate. They managed to find their groove at the dish with a big 5 run 4th but the Jays answered in turn and kept their comfortable lead.

Being able to keep things close they were still down 4 runs going into the top half of the 7th. Adria lead it off and capped a 4/4 game with another big hit. Marie eve showed good patience with the 1-1 count and drew a walk while Krystle dropped her signature opposite field fly ball for a single. Dallas got 2 RBI on another base knock. Michelle and Tiana finished off the scoring and in the end put up a 5 spot to have a chance to win it if they close out the bottom half.

The first two outs were recorded quickly but the Jays weren’t going to make it a cake walk. Next two batters found their way on board and with the winning run on first Michelle made a nice snag at shorty and threw to Katia to get the final out at third base.

A great celebration ensued although we knew we were going to be crushed in the next game as the team finished first overall even ahead of the piss tanks. That game will not get a post game but suffice it to say they were actually nice and didn’t have any douche bag fans yelling dumb stuff from the stand so was actually a decent game.

In other notable events from the weekend Lyndsay made her third catch in out field and looked good doing it since she’s finally wearing ball pants. Dallas took a ball off the face and Adria got a free mammogram from the fence. As she yelled across the field she got hit in the boob followed by “fuck you Dallas!” Krystle was far more concerned about her boob then she was with Dallas taking one off the noggin. Kim pitched like a boss with several strike outs. When Tiana got walked asked Krystle “do you know why they walk me? There’s nothing that can be done!” quote from her jersey. When Dallas wasn’t taking the Oriole’s coach’s advice and catching it with her face she was out there make sketchy shoe top snow cone grabs. Katia had a rocket shot that almost made it to the fence sadly was caught tho. Claudia got a tan, not actually, she slid and cause of the wet dirt her leg was brown the rest of the day. Convinced her to buy ball pants tho so it worked out in the end. Alex and Eric base coached and helped with line ups for the games but mostly were only useful for smelling good in the dugout. Dogs were around all weekend and Eric was babysitter for one on Sunday while the ladies were in the field and Dylan made an temperance with Dash on Saturday.

Other shenanigans ensued as Dallas got stuck some how on the ground between the bucket seats and the back row of Pam Vanderson. She did however out man Alex at an arm wrestle tho so we won’t make fun of her too much.

Quote of the tournament: Krystle – “You’re going to arm wrestle??? SHE WRESTLES ALLIGATORS FOR A LIVING!!!!”

Representing Ottawa Softball. Lady Buds wrecking it. Suds Buds and Windmills will look good everywhere we go. Rocking it Until 2039. Sports community that’s all inclusive. Let’s grab some Suds! Where there’s Softball you will find SBandW.