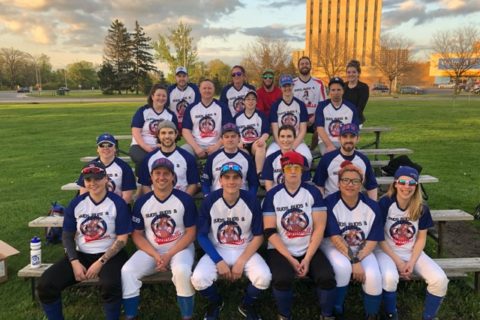 With the ever growing clan that is SBW, the SBW empire had entered two teams into Friday night softball. All the excitement quelled as the first Friday would see the veteran SBW team meet up against the start up Babes.

The end of the top of the first inning saw SBW jump out to a quick and dominating 7 run lead. Led by captain Lyndsay, the Babes would not be intimidated by the mighty SBW vets. Answering in kind, the babes recorded a solid inning of five runs, led
by the imposing power and crushing home run delivered Eric. At the end of 1, SBW led the Babes 7-5.

The Babes defense slowed down SBW in the second and third innings, allowing only two runs per while not recording a single run in either inning. At the end of the third, SBW led the Babes 11-5.

The fourth inning however was a different story, the Babes showed smothering defense, allowing no additional runs to score. As their turn at bat came up in the bottom of the inning, the Babes offense still struggled. The only bright spot was a solid home run delivered by special guest, ‘Merica. At the end of 4, SBW led the Babes 11-7.

Top of the fifth saw more scoring from SBW as they dug down and rung up two more runs, showing the Babes that they were still the favorites to win it all as they went on to stifle the Babes, keeping them scoreless.

What seemed like it would be the end of the game turned out to have time remaining for a 6th and final inning, giving the Babes some hope on proving that they belonged in the same league as SBW. This was short lived as SBW run up 4 more runs in the sixth to a commanding lead of 17-7. The Babes had their backs to the wall, while many would crumble under the pressure of a ten run deficit, the Babes came out swinging. Starting slowly, the rallied and got two solid hits, putting two on the bags
as the visitor from down south came up to bat. Looking unfazed by the score, he calmly walked up to the plate, stared down the pitcher and watched as a very good strike crossed the plate. As he dug in for the second pitch, he harnessed the strength and power of the might bald eagle and swung an easy, but powerful swing as the ball came to the plate. The bat sung a beautify song and the ball rocketed
over left field, the crowd and players attending let out a gasp and watched in stunned silence as they saw the ball sail over the fence, over the net and end up landing deep into field 4, all to the surprise of the team practicing. In the end, the Babes put up a valiant fight, but fell to SBW 17 – 10.

It’ll be a bright season for both teams.