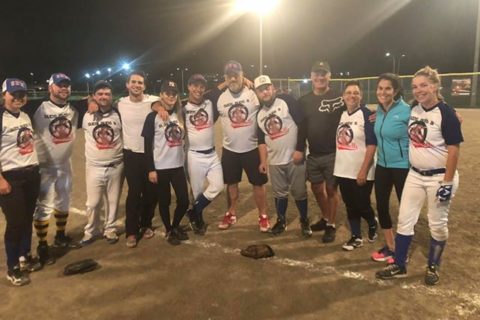 Fall Ball Tuesday having some extra members on the roster welcomed Sophie Deslauriers to her first SBW game.

No Glove, No Love showed their potential at the plate putting up a 3 spot in the top of the first forcing the Buds to show them what they could do with their sticks.

Alexander started off the bottom of the inning with a 2 base walk and Jess promptly switched places with him crushing a double and starting the scoring. Seb would keep the ball rolling but Krystle hit like a douchebag male as she usually does these days (actually it was a sac fly I just wanted to fire some shots) and all of a sudden it was 3-3 at the end of the inning.

Second inning was close with glovy lovy scoring 1 and SBW scoring a pair on an Eric Delisle single. 5-4 after the second inning.

SBW pulls even further ahead over the next two innings scoring a combined 8 runs and not allowing anything defensively going ahead 13-4.