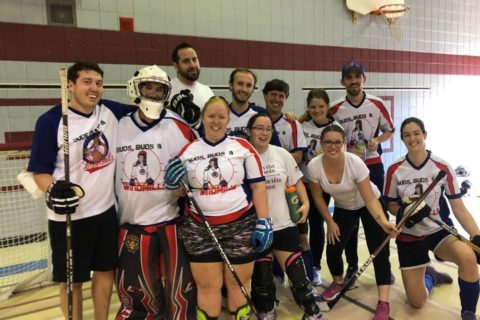 In our first game of the day we had SBW taking on NR, in a game where the first half had lots action and the second was a little slower. Out of shape Alex Thomson would swear to quit smoking to change that …

It took only minutes before SBW would score first as Jake Miron would cut to the middle and wrist it low blocker, to take the 1-0 lead. Dylan Cundell

would extend the lead as he grabbed the ball off the wall and wristed it down low making it 2-0. Alex Paquette (Baby Alex!) would make it 3-0 as he would get the ball off a misplay, make no mistakes and wristed it on net, the goalie got a little piece of it, but it wasn’t enough.

from a near perfect pass from Claudia making it 0-4. Ryan Asstasstic would stop the bleeding as he banged home a rebound in front. Cundell would get a pass and walk it in and wrist it opposite corner. Baby Alex would round out the scoring in the half as he walked into the slot and ripped it upstairs, making it 6-1 as we were headed into the break.

Assistant Captain Krystle had planned to join SBW’s bench in the second half but sensing that it may be a mercy game she chose instead to take impromptu photos and videos “even a four year old can tell the buttons apart!” & shuffle back to keep Jake’s hot Girlfriend Kaitlanne (pronounce it properly) company catching her up up on the riveting tales of Bhockey games past.. who doesn’t like story time?

In the second half NR had the lead in shots, 24-13 but as usual Riel, Riel, RIELLLLL, had his posts and everything in between covered.

The second half saw a lot of shots, but goals were at a premium.

It took about three minutes for our first goal of the half and it belonged to NR as Jason Francis would blast home a cross-floor one-timer, making it 6-2. About ten minutes later, Lawrie would get a milestone goal, his 300th goal Sunday Co-Ed goal. It was a beauty a he picked up the rebound and flicked it far side making it 6-3.

There were tons of shots in the second half, but only those 2 goals and SBW, playing like Gretzkie leaves both Lawrie & Asstasstic with some regretskies, take this one easily 6-3.

How bout them apples ?