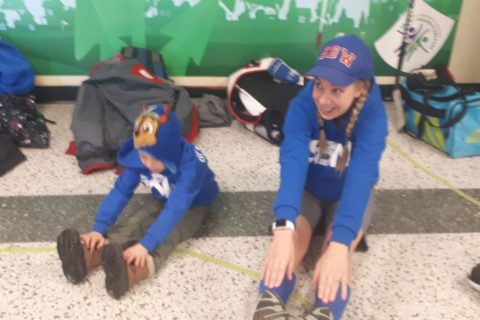 In our next game we saw SBW taking on HSK in a very close battle. Due to unforeseen circumstances, SBW goalie was late, luckily they found a stand in and didn’t have to let any softies into a wide open net. But it didn’t take long for HSK to beat the replacement as Andrew Anderson would get a pass from the slot and one-time it up top making it 1-0. A couple minutes, and twelve shots, later SBW would get their expected starter back. Thanks, Guillaume, for the stand-in. As the period was winding down, HSK would take a penalty, but it didn’t seem to matter as Dan Robert got the ball at the point and from just inside his side of half, with a good amount of traffic, beat the keeper while shorthanded making it 2-0. And that’s how it looked at half as HSK held the lead 2-0, as well in shots 21-12. The second half saw some good goaltending and lots of chances, but not many goals.  About twelve minutes in, Claudia would break the shutout bid as Dylan Cundell would fire a laser that hit the iron, and just sat behind the netminder, and Claudia would tap it in to make this a one goal game. SBW would get some life back, but HSK would just shut them down as they take this one 2-1.