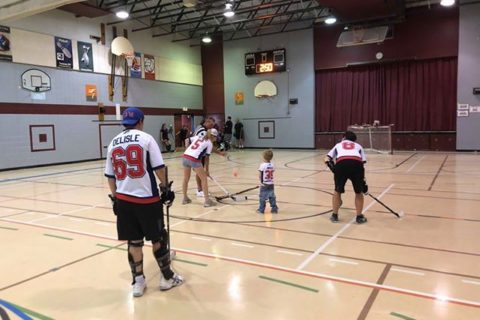 Our next game of the night saw SBW taking on VI in this crazy goal filled night which required extra time to figure out. First, and second, we would see VI score. Luisa Lawson would one-time it home on the power play and then Amanda Saffiotti would wrist one home putting VI up 2-0. SBW would respond about a minute later as Dylan Cundell would grab a rebound and wrist it home. Jayme Albert would get the next one, for VI, as he blasted one top corner from the point, 3-1. Jake Miron would get the next one as he wristed one short side, 3-2. Albert would get that one back as he would take a wrister in the slot to make it 4-2 as we were headed into recess. SBW had a shots deficit as they were being outshot 16-9, but that didn’t stop them from getting out there in the second half and putting on a show. First Cundell would walk in, deke and finish off the scoring drive all off the first face-off of the half. Next, we would see Albert getting his second Hat Trick in as many weeks, as he backhanded one home while in the slot. A little over a minute later, Patricia would get SBW to within one as she wristed a beauty, short side, up top, 5-4. With time winding down, VI would take a bad penalty as they got dinged for Too Many Players on the floor. SBW would even this one up with just thirty seconds remaining as Miron would tip a Cundell point shot in front of his nipple… and with that we were headed to a shootout. This year, in case you haven’t read the rules, we have a new format. First a two-person shootout will happen, one guy, one girl. If there is no winner after that, we are headed to an alternating, guy/girl sudden death shoot out. The first two shooters went, and it wasn’t over yet. But, in the third round Cundell would score and the SBW goalie would make the save as SBW take this one 6-5SO.