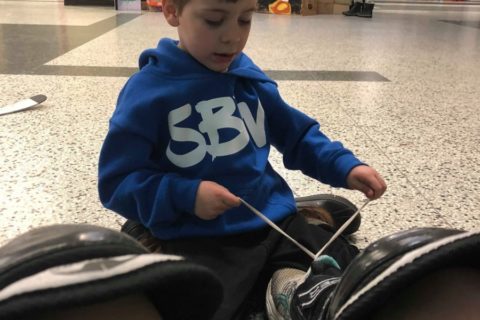 Our next game saw SBW taking on DOH, in this tight game where the winner would get a chance to play In Lord Matthews We Trust, later on. The first didn’t have much to write about as both teams were playing some strong D. DOH would open the scoring, while on the power play, as Heather Sagar would throw one on net that eluded the goalie, 1-0. A couple minutes later, Sophie Filion would beat the keeper cleanly with a shot in the slot, 2-0. The first half would expire and DOH would hold the 2-0 lead and also outshoot SBW, 22-12. The second saw the same amount of goals as the first as both tenders were on point. Alex Thomson would break the goose egg as he got the ball in the middle from a giveaway and roofed it, making it 2-1. With about eight minutes remaining, Wes tam would tip a pass into the net making it 3-1. there was plenty of time to get back into it; unfortunately for SBW the opposing goalie was on his game. Time would expire and DOH would get their shot to take down ILMWT later on in the day as they take this one 3-1.