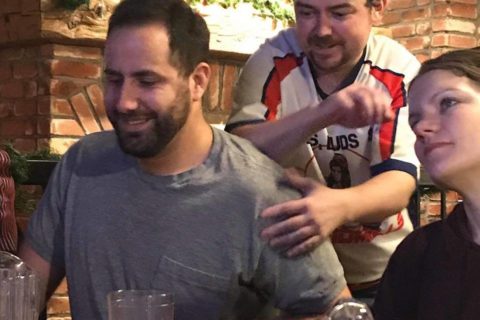 In our next game we would see SBW taking on DH, in this crazy and surprisingly close game. fresh off the bus from DUSTED(Drink Unsuspecting Establishment Dry) the Buds would be sluggish to start. DUSTED = 26 amateur athletes who are professional drinkers attempting to drink a bar dry. Only Bells, Baby Alex, Jake & Kelly (who found her own party, don’t worry) would have fresh legs. DH would take full advantage and come out swinging as they would get the first three goals. Bam! Bam! Bam! Robin Kerr would go back-to-back. First he would tap in a loose ball, and he would follow it up by tapping in a nice pass. Next we would see spare, Chelsea Harbert, shovel the ball over new comer goalie Claudia.

Emilie would make her debut as a defender but by the end of the game, it was clear she didn’t like the D much to Claudia’s relief.

SBW would realize they needed to pull their socks up & apply the night priors team bonding. With Riel looking in from the side lines the team knew they couldn’t let him down. Dylan who has as many points this season as he had drinks the night before (Seriously we verified that fact) would eagerly repeat the words on his jersey “put me in coach”. Assistant Captain Krystle would do just that and sure enough Dylan would take the floor and go back-to-back. He would first be left alone in low slot and tap in a pass from Krystle then followed it up by faking the goalie one side and sliding it in for an unassisted 2nd goal. Jake would remind us he can score too and get the next as he waited while the goalie came out too big and just walked around and tucked it in making it 3-3. Both boys making scoring look easy.

Martin Roussel would get the next one as he received a pass from behind the net and just wristed it home. SBW would get the next two to complete the half. Taking a note from Cap’s favourite NHL player, the boys on defense would become offensive defensemen & give us the next two. Bells would beat the keeper with a lazer point shot, low corner. Captain Eric would blast home a one-timer to make it 5-4 as we were headed into the break. SBW would hold the edge in shots, 28-10 but the bench would wonder out loud if the end score of this game was destined to be the first 40-40 ball hockey game in history. Claudia would see less shots this game then the team took the night prior, including but not limited to the mystery flask.

The second half would be as crazy as the first. Miron would open the scoring as he snapped one low, on the far side. Kerr would complete his Hat Trick as he went hard to the net and just banged it in. Krystle would one-time home a perfect pass from Dylan to keep her team ahead by 2.

Harbert was at it again as she got a shot that went off the goalie’s head, up and off the tenders back and in to make it 7-6. Dylan would try to make another perfect pass but Kelly would hear the loud TING echo in the gym, and be reminded of it at the team meeting/bonding after the game.

Cundell would complete yet another Hat Trick of his career as he wristed one home from half, top shelf. With time winding down, and an open cage, SBW would seal the deal as Sarah Z would bury it into the empty net making this one a 9-6 final.