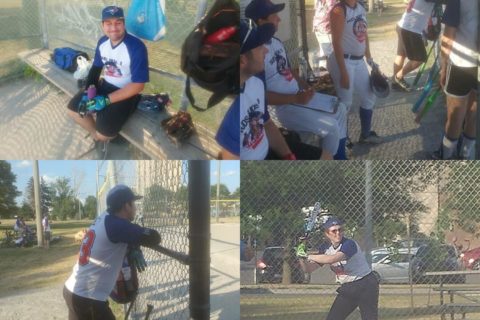 Battle of the Wind

This game was literally a gong show for walks, batter after batter were seeing pitches and just letting them drop because it was once every 5th or 6th pitch that a strike was called. As the game progressed players finally began to say screw it and swung the bat hoping to connect with the ball, but the wind was a deflate gate and for awhile if it were hit in the air it was deflate gate and the ball would hang for an easy snag. Once we got the pitching under control, they started hitting a lot of slow roll grounders which helped us get the outs we needed inning after inning at that point the sticks came alive and we started hitting single after single double after double and I do believe there was a triple or two made. This game was a back and forth game that’s for sure, tied for most of the game and in the top of the 7th they came out guns blazing pulling ahead of us but that didn’t stop this SBW team because bottom 7th was who can be more clutch them or us. Well in the end we were the clutch ones, down by 3 runners on second and third the ball’s hit and for a moment the ball kept hanging in the air looking to be caught but the OF misses it as it hits the fence both runs were cashed in and tying run on third. Next batter comes up big with a sac to cash in the tying run, with one out remaining we were able to sneak another player onto second which means all we need is a deep ball hit and that runner on second is coming home. Sure enough that deep ball was hit and the runner scores from second to walk it off and end the game with a 16 to 15 final for your Suds Buds & Windmills.