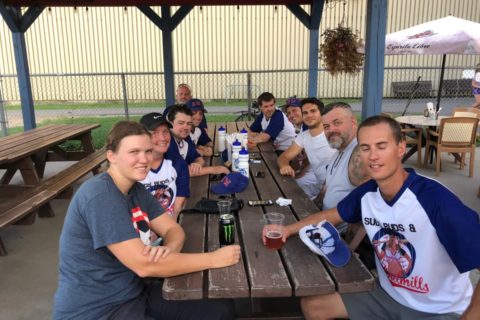 Playoffs vs The PlayBall Boys

Hot off the heels of a defended SBW Beach Volleyball Championship the softball playoffs finally kick off. The Buds did a rain dance to make sure the previous week would get rained out so they could have All-star short stop Justyn with a “Y” back in the lineup for the for the big post season game against the Playball boys.

Going into the game, The Buds had a regular season record of 2-1 against the Bunnies with that loss fresh on their minds playing the last game of the season against them short staffed.  Having that fresh in their minds with the rematch at the 6:00 pm time slot was scary as our out of town players come rushing in a game time.  Thankfully Captains Eric and Daniel went over the rules with the ump for a while giving Isabelle time to join us for the start of the game. And what an addition that was as the game kicked off with the cleat-less Isabelle (or Julie depending on who you ask) making a great running catch off the bunnies leadoff hitter (I think it was Jesse). It was quick work from the Buds as Isabelle got her second catch of the inning finishing it off leaving Captain Dan the Man stranded at second.

SBW gets right on it with lead off Alex single but had failure to launch as the wind kept back the blasts from Julie, Seb and Pete into right field (a constant reminder for Seb to have a level swing and not try to send the ball to the moon). Co-Kaptain K, Krystle has a wardrobe malfunction as her sole ripped open – from her cleat – a bad omen for future at bats. Deadlocked at Love!

Right back at it the defence comes up big having all that sunlight to make the require stops, holding the Bunnies off the board. No love from Justyn with a Y as he decides to make it rain his own way and takes a solo breaking the ice. One Love for the Buds.

All Revved up, the Buds D lock down the Bunnies with a three pitch inning defence coming up big keeping the momentum up. (I need a fact check if it was the 3rd,4th or 6th inning the three pitch inning happened, but 3 in 3 is way more awesome).  With the Windmills starting to surge, Seb decides to ride the wind and jacks a 3 run shot to center field, and not getting hung up in the rightfield. With energy to the legs and a big double from Isabelle, the Buds cash in a few more.  Buds make it 6 – 0 bottom 3.

Like a good curling game the 4th end was blanked.

Top of 5, everything is alive.  Captain and chief Bunny Danny “The Jet” LeGeyt leads off the inning. Not looking for the solo he sends a missile to short.  Up to the challenge was our hero Justyn with a “Y”, who managed to land that ball and send a rocket of his own over to Peter H, who scooped a backhand one hopper leaving The Jet stranded on the tarmac. The Buds were a bit dumbfounded by that most perfect play and proceeded to follow it with some errant throws, which the bunnies were more than eager to hop on getting themselves on the board.  The Bunnies feeding on that momentum jump back into the game with a little knee bend and big 3 run shot from Kevin – bringing the Bunnies within 1.

The Buds manage to right themselves and swing it off. With some clutch hitting from the top, Alexander manages to complete his leadoff duties by going 3/3 setting up Seb – for a Fielder’s choice (Also Krystle is up to 2 K-Fouls and looking like deer in headlights at bat) but then also setting Petey Pete to takes his own 3 run jack to rebuild  the lead  making it 9 to 5 and the game’s final.

Notable notes (Things that happened but I don’t remember when):

Julie W had Billy “The Kid”’s number as she caught him out twice in right field.

Kaptain K? Krystle’s defense was a perfect 3/3 at 2B but was a dismal 1 for 5 at bat – with two foul Ks. But the hit was with a broken shoe!

Infield dominance, Alexander at 3B and Justyn with a Y had at least 5 runners gunned down at 1 with Peter H standing tall.

Girl Power- Isabelle and Julie W crush the right side of the outfield making at least 5 outs over the course of the game.

Captain Eric managed to sneak in a backward K on a bunny.

Alexander made an awesome heads up base running play by taking 3rd when the shift was on Isabelle.

Seb almost caught a girl shot that burned him clear in center field. She mashed it but he only got the tip.

Captain Eric chased with elusive strikeout on Daniel as he got close with Daniel actually missing a swing and taking the strike count to two!

It was a game where sunlight and defence reigned supreme and a combined 10 of 14 runs where score for the 4 homeruns of the game!